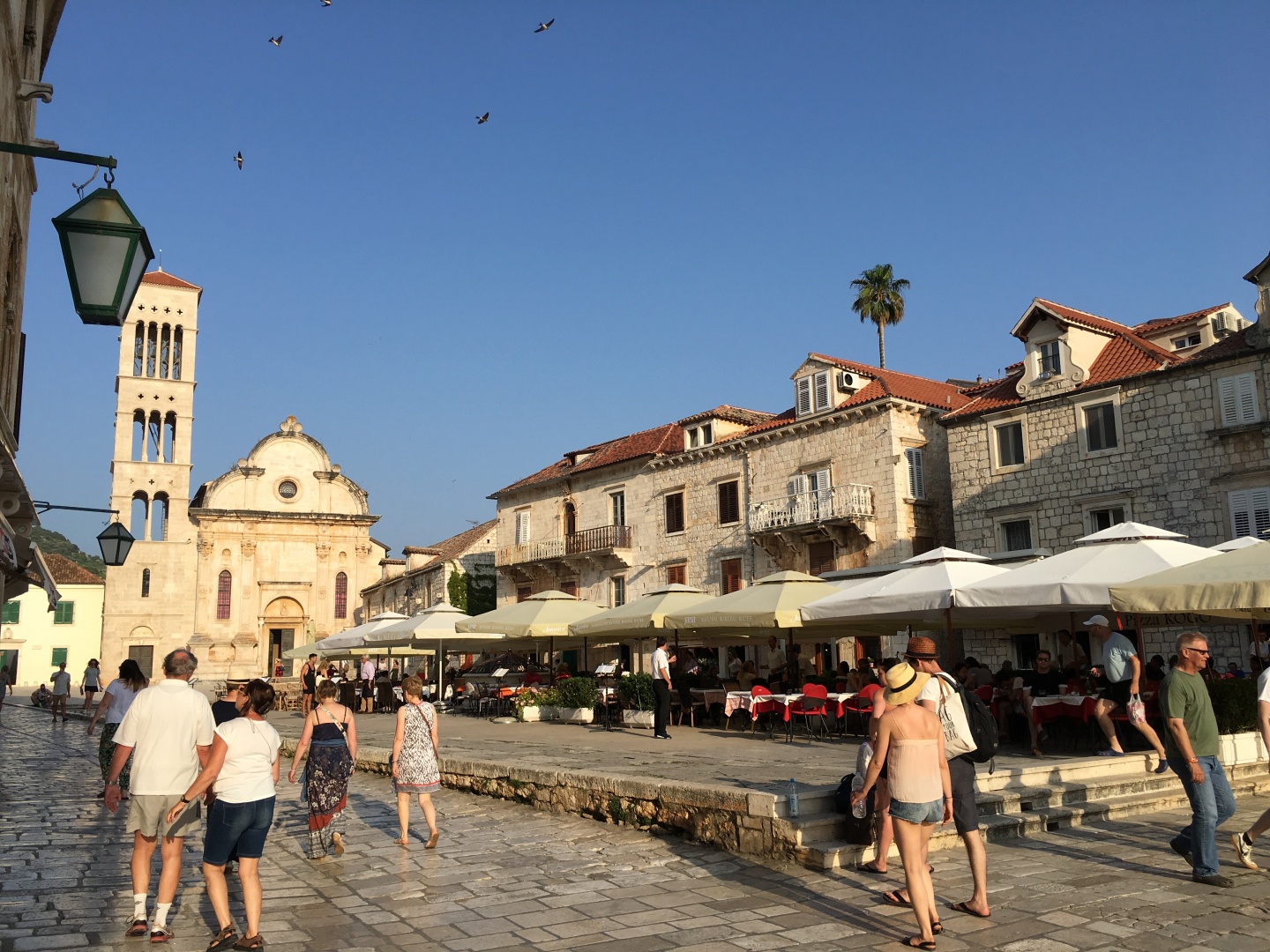 It’s way too easy to come up with puns for a name like Hvar. Trust me, once you arrive on the island, you’ll be doing it nonstop.

When we were initially planning our trip to Croatia, Hvar kept popping up as a recommended destination, but was typically described as the fancy, yacht-owners island that was also a serious party spot. My friends and I were not interested in these things. We had our doubts about Hvar. But it was only a matter of time before we were falling in love with this island.

Sure, there are lots of enormous yachts in the harbor. And yes, there are lots of places to party. But that’s not all that Hvar offers and, if you take the time to explore, you will be pleasantly surprised by the beauty the island has to offer.

Hvar Town is where you will find the yacht/party crowd, it’s the main town on the island and where the ferries drop tourists. There are two other larger towns on the island – Stari Grad and Jelsa – but it didn’t seem like there was much in either town that would warrant staying anywhere other than Hvar Town. This is where you want to be.

Getting There: We arrived via ferry from Split, the ride takes about one hour. As soon as we arrived in Hvar, we purchased our ferry tickets for our next destination (Korcula) so we could make sure we’d get on our desired ferry. Highly recommend doing this.

Lodging: We stayed at a small rental apartment building in Hvar Town called Apartments Jure. I definitely recommend this place, but be warned: there are A LOT of stairs to get to the building. When you are carrying luggage, this is especially challenging. Of course, we enjoyed a great view from our terrace… Our host, Marija, lived downstairs, and was extremely helpful in arranging reservations for us during our stay.

What to Do in Hvar

We didn’t really know what to do with our time in Hvar and waited until we got there to sort out our plans. We knew that we wanted to do a sailing excursion at least once in Croatia and decided we would do it in Hvar. We also considered wine tasting, visiting a few of the other surrounding islands (Brac, Pakleni islands, Vis). We were only on the island for two full days so choosing what to do was overwhelming! In the end we found ourselves visiting a few different tour places, asking about various sailing excursions and island trips before making a decision. There are a number of these tour places near the harbor and after going to a few (and realizing that many sailing trips were already sold out), we wound up at Fontana Tours, which was also a little shop with women’s clothes and swimsuits. That said, we had low expectations, but the tours they booked for us were awesome and I would absolutely recommend checking out their tour offerings.

We then drove to Vrboska where we had our wine tasting at Veia Caric. Vrboska is  very cute town with a canal running through the middle of town and the locals call it Little Venice. It’s a sleepier town, but very charming, and we were really happy we had a chance to see this other side of Hvar. Our wine tasting was very charming and we had a private tasting as no one else was there. We were offered some cheese and bread, tried 4 different local wines (white, rose, 2 reds) – they were all delicious. What I learned is that Croatian wines are really fantastic, though somewhat unknown in the US. After this tasting, we made it a point to try these Croatian wines everywhere we went (Posip was our favorite white, Plavac Mali our favorite red). We also bought a bottle of the posip, which reminded us of a Sancerre (though much cheaper!) The reds were also very interesting, complex flavors.

There aren’t really any large beaches in Hvar. Hula Hula, a beach bar, was recommended to us as a place to go for some sunshine.  While it turns into a major party scene around sunset, it’s actually a great spot for hanging out in the afternoon. Not very crowded, comfortable loungers, food and drink, and easy access to the water. Many of the other places we saw nearby had loungers that were perched on rocks and looked difficult to access the water (let alone super inconvenient). We spent the afternoon at Hula Hula one day (warning, it’s cash only), and snuck out as the party crowd was arriving around 5pm.

Hvar, being very touristy, has plenty of great restaurants and plenty of mediocre restaurants. The trick is to ask the locals where they would eat…