When my friend and I were in Seville, we decided to spend our last day in Torremolinos, a beach town close to Malaga. We were flying out of Malaga, which is about 2 hours by train from Seville. We didn’t want to take a super early train and possibly miss our flight so cut our time short in Seville and headed south a bit early. We stumbled across Torremolinos in some quick online research which sounded like a nice beach getaway on the Costa del Sol for the final day of our vacation. We also managed to find a beachfront hotel at the last minute.

But Torremolinos was not quite what we expected.

We took a 12:50 train to Malaga and, from Malaga, about 20 min cab ride to Torremolinos where we had booked a room at Fenix Hotel. When we first arrived at the hotel, my friend and I definitely thought it was a little strange, but we were there only for one night. The hotel is huge and seemed full of many older people on their beach vacation. Our room had a sea view (for the most part), and we also got a coupon for a free glass of cava when we arrived. The wifi was not great at the hotel, but we would not be there long. Upon settling into our room and checking out our balcony we discovered two things: 1) there was a beach club not far where we could go for lunch and some final beach time, and 2) there was mini golf within walking distance of our hotel. We had our plans for the next few hours.

El Velero Restaurant and Beach Club was exactly what we wanted. We were starving when we arrived! Ordered salad with avocado, olives and shrimp; sardines, meatballs, and a few beers of course. Everything was pretty tasty and the place was rather crowded. After lunch we got some chairs on the beach – cost 9 euro for two. There was a hot masseuse on the beach, but he closed up before we were able to take advantage. Stayed at beach until 7 when it felt like they were closing up and putting the chairs away.  For some reason, there are a lot of weird garden statues around the beach club and restaurant…makes for some very interesting photos! 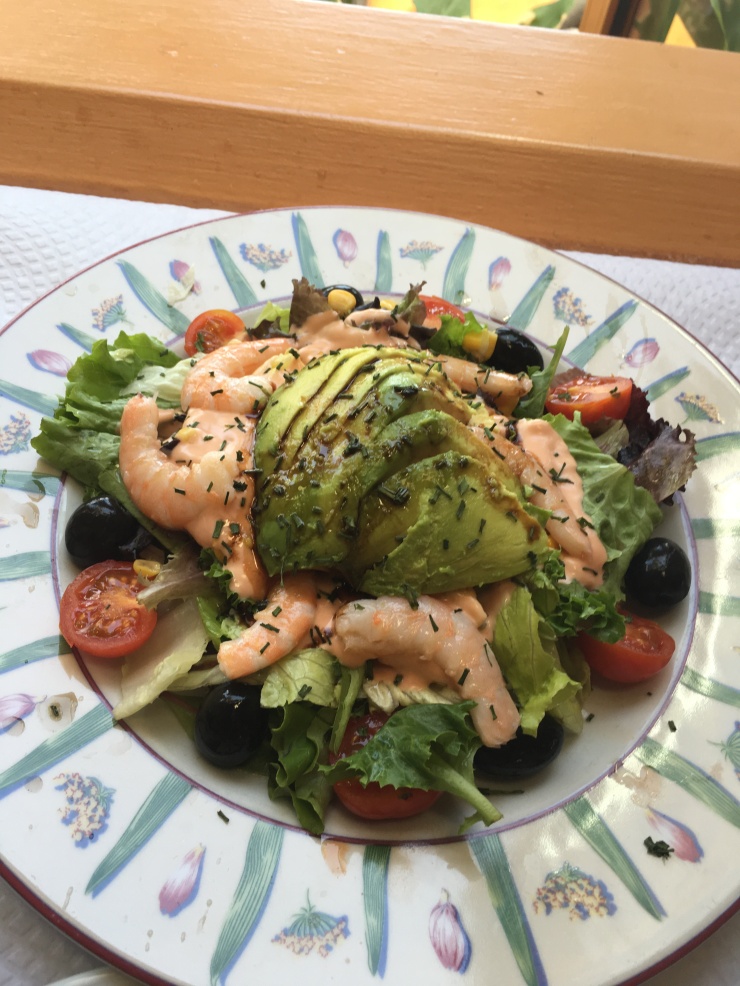 After the beach club, we cleaned ourselves up and went to check out the mini golf place before dinner. Minigolf Park felt like something in the US (like Myrtle Beach), which was even more appropriate as we were there on July 4th. In addition to minigolf, there were also arcade games, kiddie rides, and bowling. Before we started golfing we grabbed a few beers at the bar, the golfing was a bit crowded and slow but we had a great time meeting other tourists at this wonderful place (there were many English tourists here). This was one of the best things we did in the trip – so random, so familiar in a strange place.

After golf ,we started looking for a place for dinner – we walked along the “boardwalk” area and weren’t too impressed by the options. Few restaurants and kitschy souvenir stands. Kept walking and more of the same. Torremolinos really felt like one of the many cheesy beach towns in the US and we realized that there probably are not many good, non-touristy spots to eat. Foursquare and Trip Advisor weren’t really helping at this point. So we settled for Casa Juan Los Mellizos which is a huge space, like 3 different restaurants pieced together. It was packed and bustling with tourists, and had been well reviewed. We felt like we might have found the one decent spot in the town. However, it was all pretty disappointing. We had a bottle of rose (ok), mixed salad (tomatoes, cucumbers, avocado, beets, corn), beef, and mixed fish plate. If it’s saying anything, the salad was the best part.

We walked back to our hotel after dinner, feeling like we had been suckered into a crappy touristy dinner on our last night of vacation, which is a feeling I really hate to have. But my guess is there aren’t many better choices in Torremolinos unless you are willing to go a bit further into town and away from the tourists. We didn’t have a car and didn’t want to travel far for dinner so our options were limited. I doubt I will go back to this area in Spain, but it was definitely fun for a short visit. After visiting, I did a bit more reading about the town and it is definitely known as a cheesy resort town catering to older tourists (and gay tourists also).