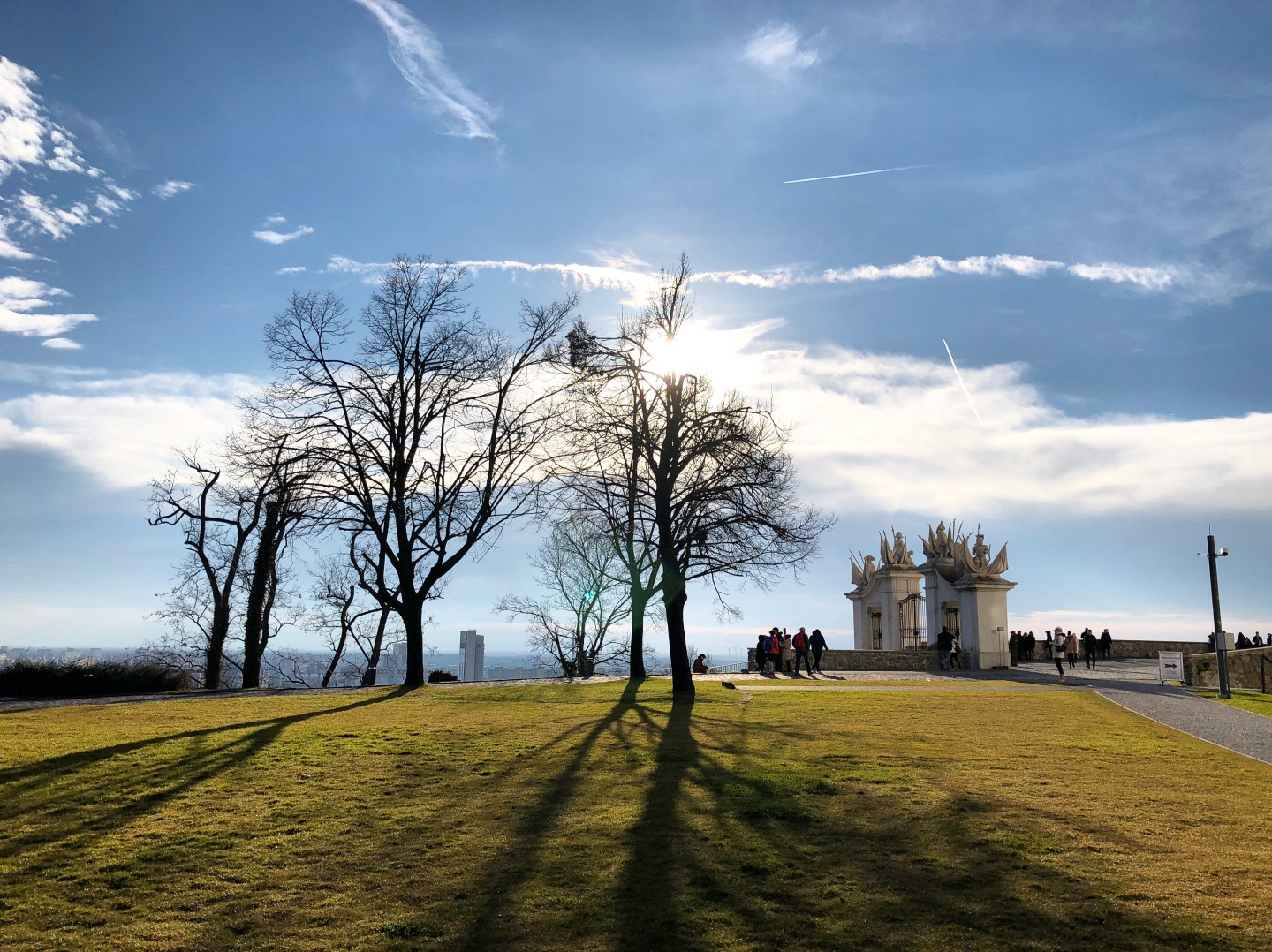 Strangely enough, the highlight of my trip to Vienna was the day trip we took to Bratislava. When planning our time in Vienna, I purposely added an extra day so that we would have time for a day trip. And after just a bit of research, I knew we would be going to Bratislava.

Why are we going to Bratislava? My mom asked. Fair question. Mentioning Bratislava to my peers elicited references to EuroTrip which portrays the former Communist city in a not so great way. I had totally forgotten about this movie and had been convinced to go by a friend who highly recommended the trip. Personally, I love the idea of being able to go to another country for the day, especially when it’s just an hour train ride away.

Bratislava is perfect for a day trip. It’s easy to get there via train and there’s enough to fill your time for 4-5 hours. I’m sure there would be plenty to do for an overnight trip as well, apparently it becomes quite the hot spot at night (as I overheard). Many people stop in Bratislava between Budapest and Vienna as well. The old town is about 15 minutes walking from the train station, and it’s a pleasant walk on a nice day. (Side note: The train station is nothing fancy, especially when compared to other major European cities. It could use some work, that’s all I’m saying). My mom and I really lucked out with the weather in Bratislava; it was a stunning sunny day with unseasonably warm temperatures in late December. It was perfect for just wandering around this city for a few hours. 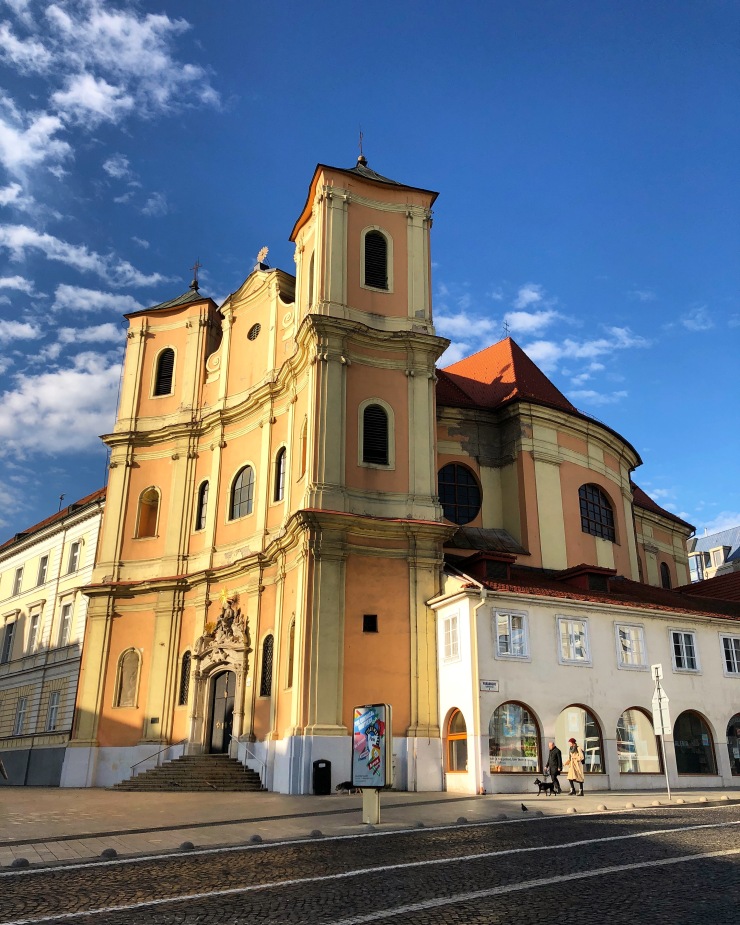 We were stunned at how beautiful this city is, the old town is quite beautiful. Take a meandering walk through the old town and take in the painted facades which reminded me so much of Prague. The old town is a bit touristy, but also so much quieter from the busy touristy areas in Vienna. It was a welcome change. After walking through the town, we walked along the Danube towards Bratislava’s UFO Bridge (not it’s real name but it is one of those wacky Communist leftovers that totally looks like a UFO). In warmer months, it is possible to take a boat ride from Vienna to Bratislava which I think would be really lovely. Unfortunately, those boats don’t operate in December!

As we walked along the river, we saw again the Castle high up on the hill above the city – this was our next stop. It’s a slightly inclined walk up to the castle and it’s free to walk around the grounds. You can pay to enter the castle, but don’t think there is much to see. We skipped the inside and enjoyed the sunny views over the Danube and the city, wandered into the castle’s garden, and then began our walk back down to the town.

At this point, we were ready to sit down and eat. There are the normal touristy, menu with pictures restaurants offering Slovakian specialties – we skipped these. Instead, I found what was recommended to be one of the best spots serving up local food and we walked towards a quiet corner of the old town to Prasna Basta, a cave-like restaurant hidden behind a passageway. I instantly loved everything about this restaurant. It was not crowded. It felt like it had a personality with all of the old photos on the walls and weird statues between tables. The servers were incredibly friendly, in sharp contrast to the service we had experienced in Vienna. And the restaurant was cheap, another welcome change from Austria. We opted for a few of the local specialities including an appetizer that was also on the dessert menu (grilled goat cheese with caramelized pear) and bryndzove haulsky, the local dish of gnocchi with sheep’s cheese and bacon.  This was incredible, and I wish I could have eaten the whole thing but it was so rich and filling. Since I was so close to Prague, I also felt the need to order a large Pilsner Urquell. 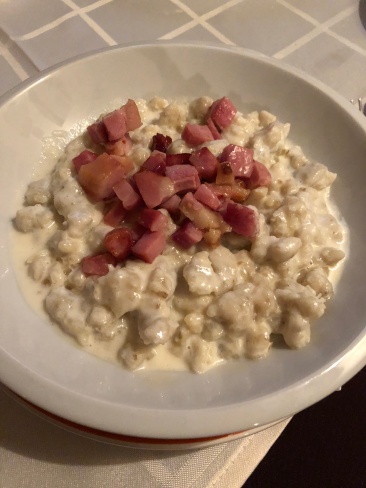 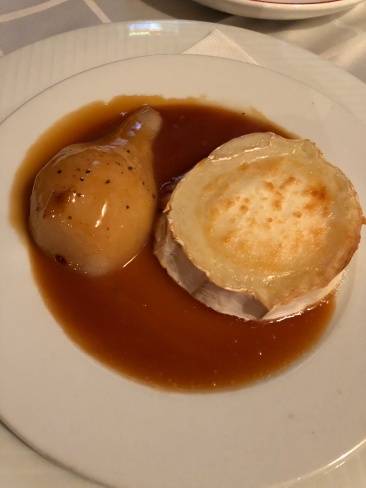 After our hearty lunch, we picked up a few Bratislava magnets to commemorate our 5 hours in Slovakia and walked back to the train station. On our walk back, I realized that what I loved about Bratislava was just how different it was compared to Vienna. It felt more relaxed, more charming, and a bit more low key. It had the curious charm of Eastern Europe, a bit less pretentious than other parts of Europe. And in just 90 minutes, we were back at our hotel in Vienna, still slightly stuffed and surprised at how lovely Bratislava had been. 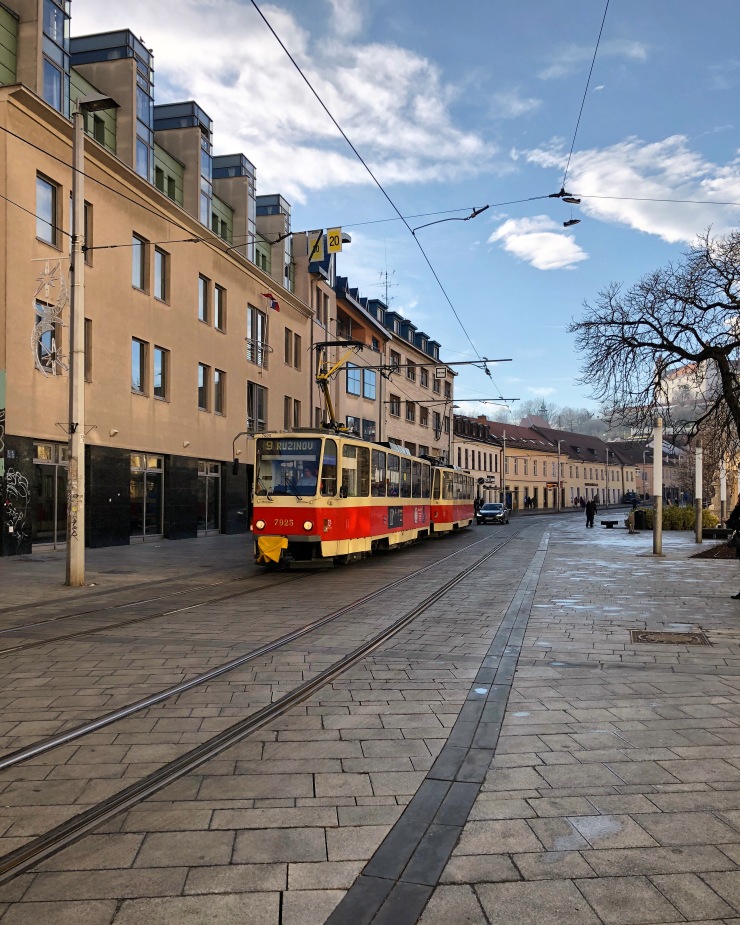