Lyon is the culinary capital of France aka the culinary capital of the world as the French would like to think (I don’t fully disagree). Some of the most famous and influential chefs have come from Lyon, and the focus on delicious food made from local ingredients is very obvious here. It’s easy to eat very well in Lyon, and it doesn’t always have to be very expensive. 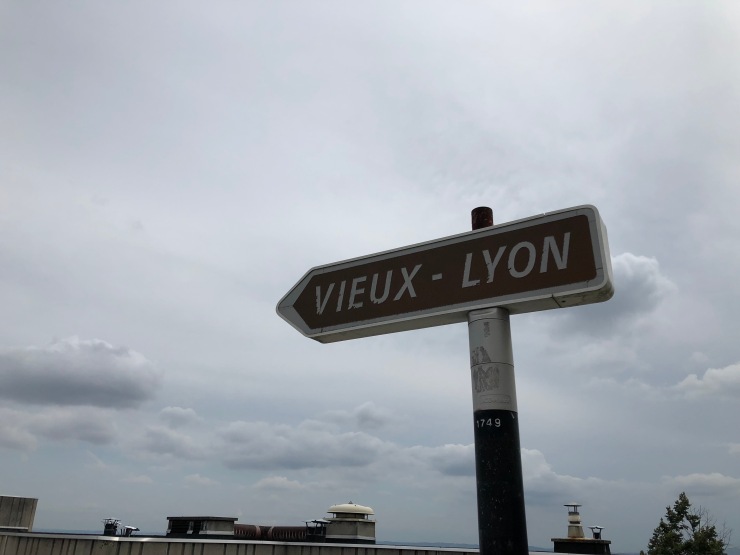 I was really excited about Lyon, I had a feeling I would really like it (see that part about food again). It’s the 3rd largest city in France and was a nice change from tiny Colmar. The city’s main center area is on Presqu’île which is surrounded by 2 rivers, the Rhône and the Saône. This area of town feels very much like Paris with wide boulevards, similar architecture. This part of town is much newer after being rebuilt in the 19th century and thus intentionally designed in the style of Paris (there is a lot of Second City syndrome I felt in Lyon and this is perhaps what I liked about it – reminded me a bit of Chicago or Brooklyn in its relation to Paris/New York). It’s a smaller version, in some ways, of Paris. But it also feels quite different, quite friendlier and more personal than Paris due to its size. 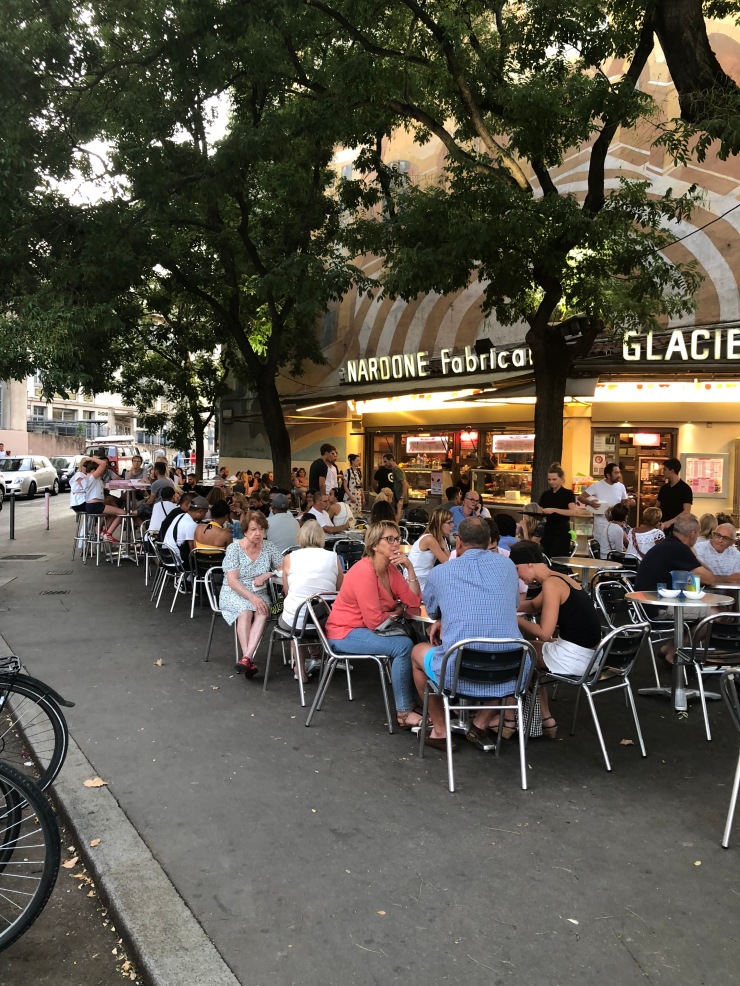 Getting There: Lyon is right in the middle of France and easily reachable by train from other major cities around the country. There are two main stations, I arrived at Part Dieu which was easy to navigate. There’s a tram stop right outside the station so easy to get to hotels from here. Also possible to fly into Lyon as it is the 3rd biggest airport in France and good for connecting in this area of the country.

Public transit in Lyon is primarily trams and underground metro. The transit is a bit limited in scope (as the lines are not very extensive), so I took transit occasionally only when it was really necessary (avoiding climbing up the hills of Croix Rousse or to Fourvière), but otherwise did a lot of walking.

Where to Stay: I stayed in Presqu’ile at the Mercure Lyon Plaza Republique. The area around the hotel was full of shops and close to some of the city sights. It was pretty easy to get around from this location and close to the river which was nice for morning runs or just strolling along around sunset. If you choose to stay in Presqu’île, would suggest this area. Croix Rousse had also been of interest to me, but I wasn’t able to find a place to stay in this area. It’s more residential, a bit more local feeling, and full of cafes and bars. I preferred this area because it felt more like the real Lyon and would absolutely look to stay in this area on a return visit to Lyon (Update: I did come back to Lyon in October and found a great Airbnb in Croix-Rousse!) 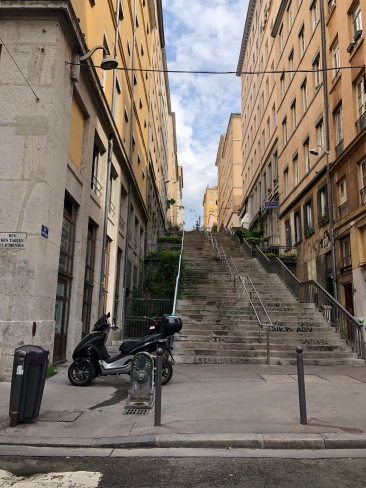 so many stairs in Croix-Rousse 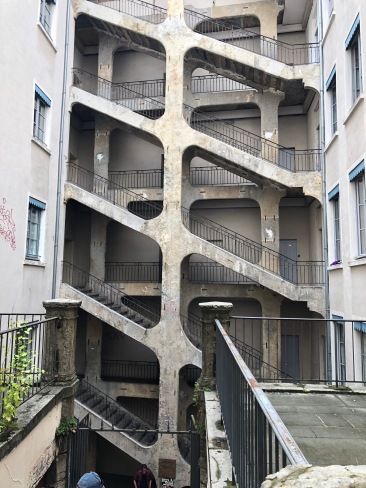 one of the famous traboules

Things to do: There is actually quite a bit to do in Lyon. At first, I wasn’t sure how I would fill my time, but I soon figured out that I would not be able to see everything in my 3 days there.

Vieux Lyon – This area just across the Saône is where you’ll find the oldest part of the city, including the Roman ruins. You can visit the cathedral just across the river in Vieux Lyon and wander around the shops and restaurants here. It’s definitely a bit touristy here, there are a lot of bouchons around here (do your research in advance to find the good ones). From here you can take the funicular up to the top of the hill (Fourvière) – the funicular is part of the Metro system so you can use your metro pass here (if you, like me, buy a 24-hour pass then it will be included!). It’s a quick trip up to the top of the hill and, when you exit the funicular, you will be right in front of the church up here (Basilica of Notre Dame was built to honor Mary after Lyon had been spared during plagues, wars, etc. It is also quite reminiscent of Sacre Couer in Paris and apparently a similar church in Marseille). The church and its crypt are quite beautiful. After you explore the church, walk around to the back where you will have a panoramic view of the rest of Lyon. It’s quite stunning up here. 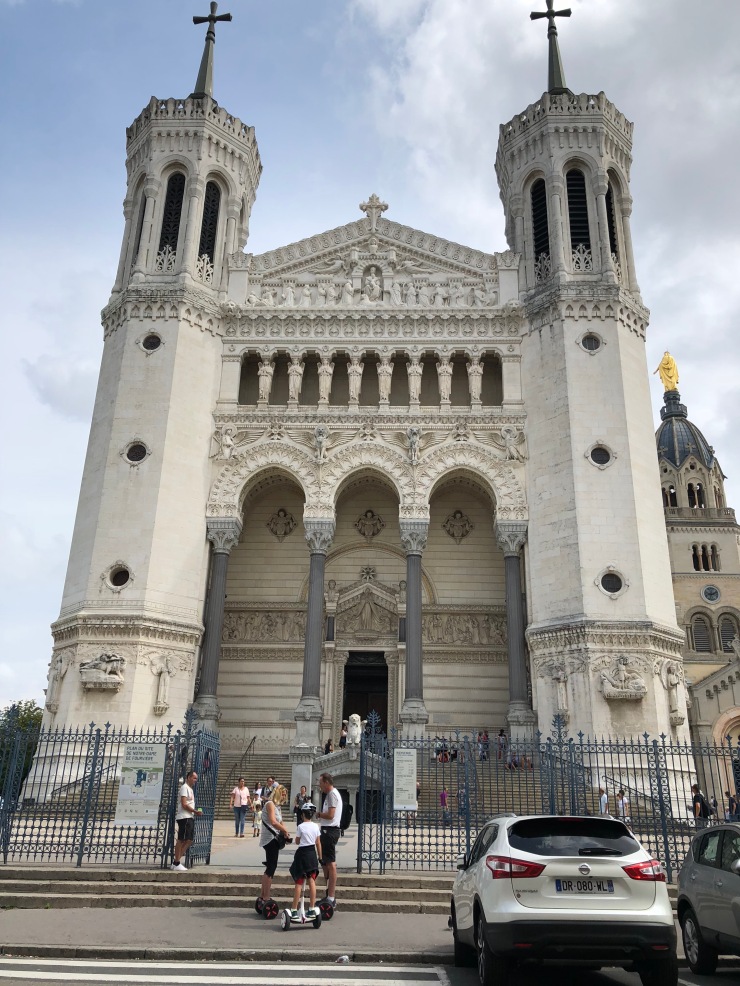 There are Roman ruins up here as well – free to visit. The ruins of the theater are huge (basically 2 theaters), the theater is still in use for some concerts. There is a museum here also, but I skipped it and just walked around the ruins.

If you’re up for it, skip the funicular and walk down to Vieux Lyon. It’s not a bad walk!

Croix Rousse – I really liked this area of Lyon which is north of Presqu’île. It feels far less touristy and like more of a local neighborhood. The walking tour I took started near the Croix Rousse stop which is close to the central square which is lined with cafes, bakeries, etc. Also a daily market nearby worth checking out. This area is high up on a hill so recommend taking the metro up here and then walking down. (I did walk up there one day and it is definitely quite a steep hill!) There are many bars and restaurants lining the streets as you walk down, young/hipster vibe here. We walked by one coffee shop on our tour where there were many people working on their Macs and a guy playing the banjo. I felt like I was in Brooklyn. This is also where you’ll find some cute boutiques, as well as many of the traboules (taking a tour will help you find these, but there are also apparently maps that the tourist office has that point out where the various traboules are).

at the Botanic Gardens 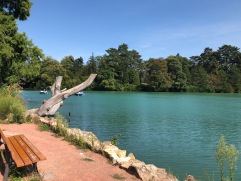 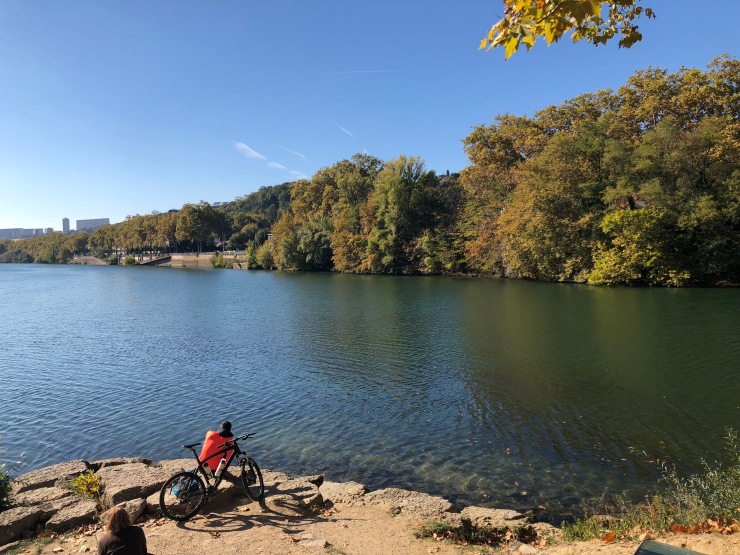 Most importantly, eating & drinking in this foodie city:

Lyon is all about food! There is a focus on locally sourced ingredients and using ALL parts of the animal in the cooking. It’s a place where you can be adventurous while you eat…but you may also want to consult your server before ordering if you don’t fully understand the menu. 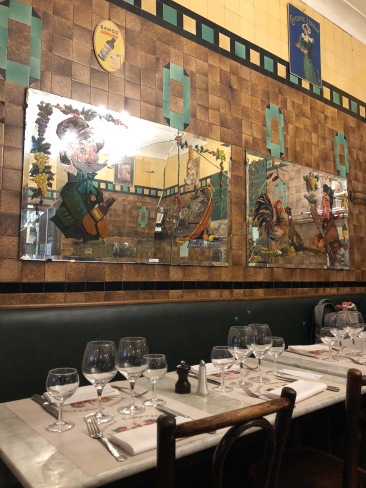 You will see Bouchons all over the city, these are the local restaurants where you can get the city’s traditional dishes and generally a 3-course meal at a reasonable price (look for the Menu Lyonnaise). The menus are typically very meat heavy and often feature dishes like tripe so not very vegetarian-friendly! Most of the bouchons offer similar menus of these old-school dishes but choose wisely. A good bouchon will offer an incredible meal, a bad bouchon will be a waste of money. Do your research in advance! If you take a tour, you can probably get some solid tips from your tour guide!

I had the big splurge meal of my trip in Lyon. How could I not? Restaurant Paul Bocuse is one of those landmark restaurants in French cuisine, some of today’s great chefs got there start here (like Daniel Boulud). It’s very traditional, it’s not cheap, but everything I knew promised that it would be an unforgettable dining experience. And it was. I was able to get a reservation rather easily (likely due to August holidays). I dined solo, was treated like a queen. It was 100% worth it. I got the Traditional Menu, which is cheaper and not quite as extensive as the seemingly more popular Bocuse menu. There’s no way I could have eaten all of that larger menu! It’s also possible to order a la carte but I don’t know why you would do that! 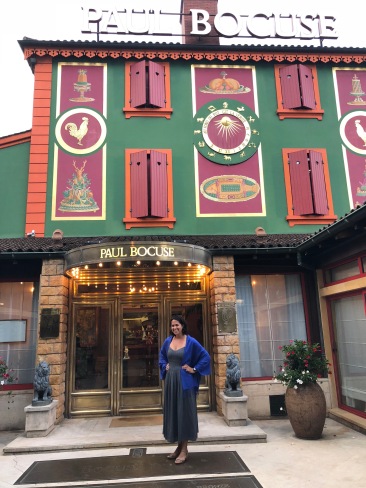 My meal included a first course of quenelle (very traditional dish here of creamed fish or meat), a second course of their famous chicken (poulet de Bresse), a cheese course (OH WOW), a dessert course (EVEN MORE CHOICES), and wine. I could barely move by the time I hopped into a cab back to my hotel (the restaurant is a few miles north of Lyon). 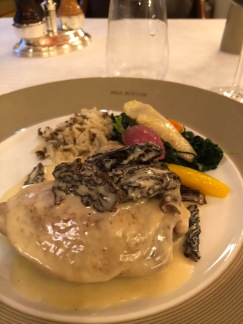 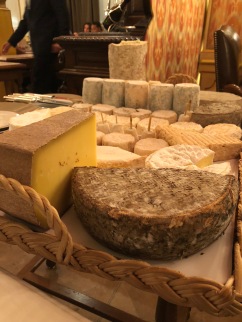 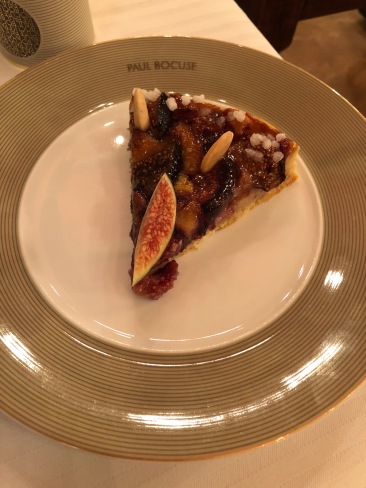 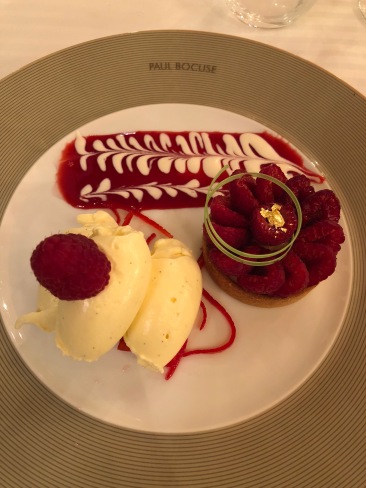 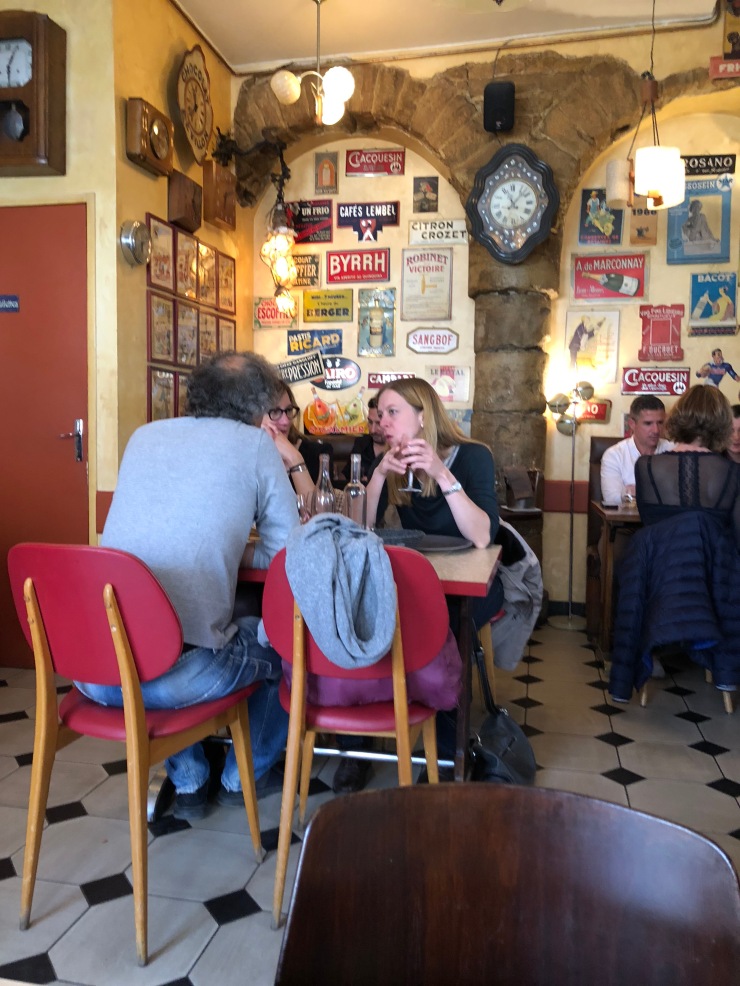 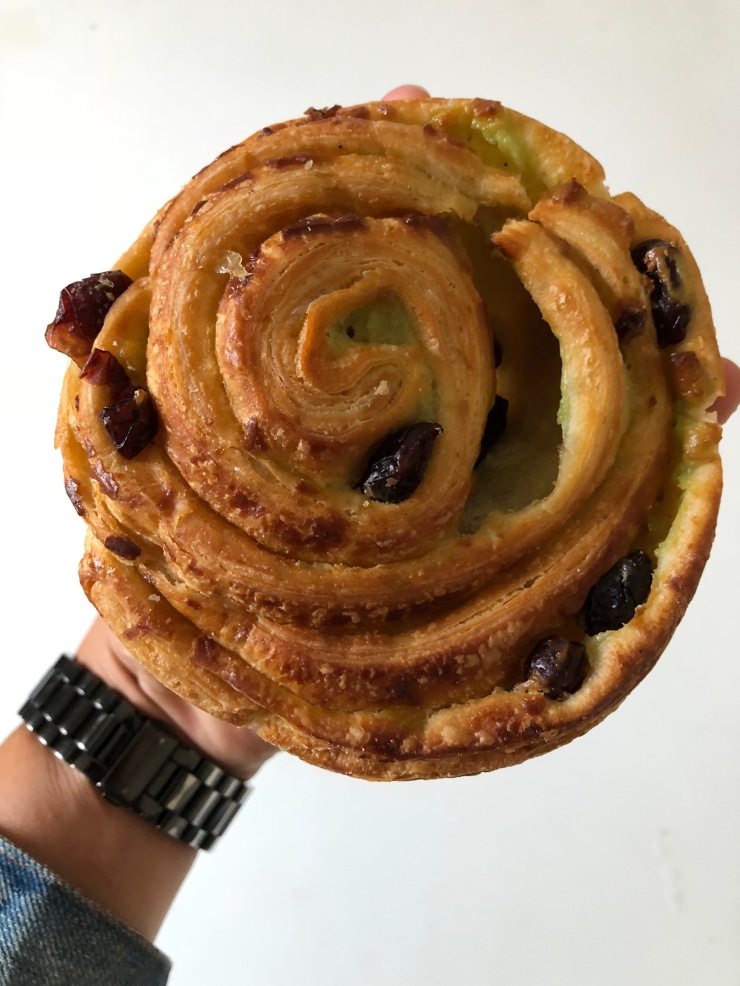 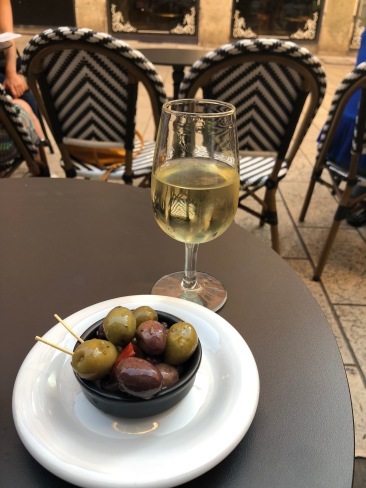 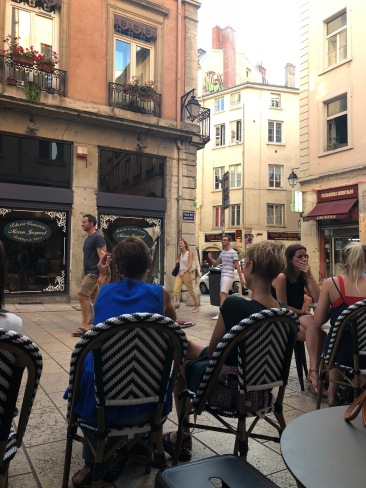 cafe culture is my favorite thing about France