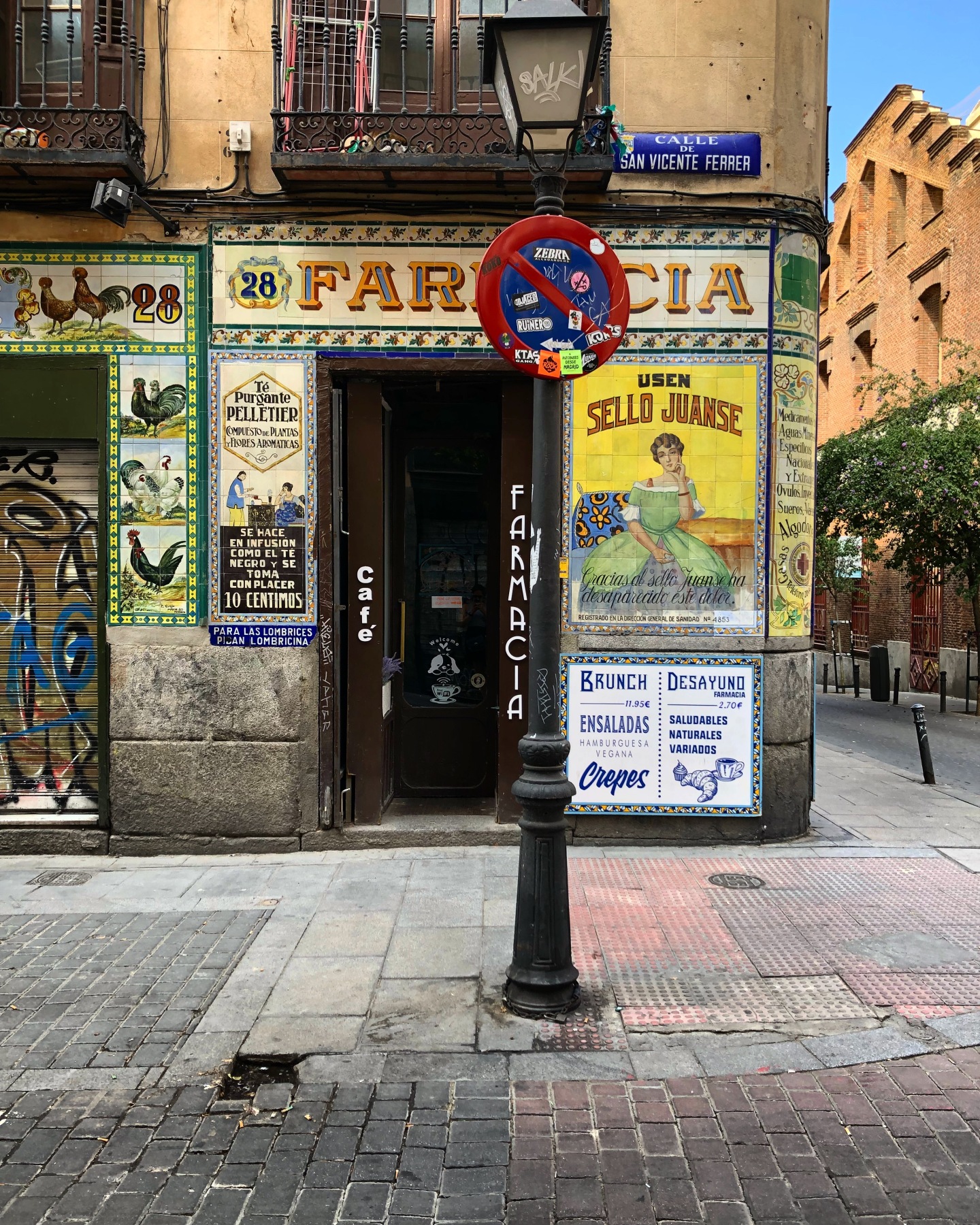 After nearly a month of travel (and a lot of small to mid-size cities), Madrid was the first BIG city on my trip. I was a little apprehensive when I first arrived – I hadn’t been in a big city since leaving New York and was quite enjoying the quieter, slower pace of places like Toulouse. Upon exiting the metro at Sol with my bags, I was faced with construction, loads of slow-moving tourists, and heat. I was hungry, tired, sweaty, and sick of pulling my luggage around.

But then, once settled in my hotel, I got excited about exploring a big city. I had a full week in Madrid which meant I could unpack (!) and feel somewhat at home for a bit.

I planned a full week in Madrid because I wanted enough time to really explore the city, just linger a bit (and not feel rushed), and take some day trips. I am so glad I spent a long time in Madrid – I really loved the city and felt like I had more than enough time to sightsee and just relax. I was able to spread out my sightseeing and have enough time for siesta. And my original intention was to do two day trips: Toledo and Segovia. However, after my day trip to Toledo, I was totally worn out and decided to skip the trip to Segovia and just hang out in Madrid instead.

Getting There: Since it’s a major city, it’s easy to fly in from elsewhere in Europe/US and accessible by train from the rest of Spain. Fortunately, it’s also easy to get to the city from the airport via public transit. Buy a tourist transit pass (offered for 1, 3, 5 or 7 days). While I didn’t use public transit as much as I expected to (because there was a bunch of work going on and some lines/stops were shut down), it was convenient to have a pass for the week while I was there so I could jump on whenever I needed it.

Where to Stay: I researched so many neighborhoods and hotels when I planned my stay in Madrid! Because it’s a big city with many interesting neighborhoods, there are a lot of options for where you can stay. I found some good advice here.

I booked my stay with airline miles, so I had some limitations on what was available and where I could stay. In the end, I stayed at the NH Collection Paseo del Prado right near the Prado Museum and not far from El Retiro Park and the other major museums. I liked this location because it was close to a few sights and easily walkable to other neighborhoods. It was a bit touristy due to the location and the number of hotels in the area, but it felt very safe and well connected. I probably would choose a different, less busy area if I returned to Madrid but it was a good spot for my first visit. The hotel was great and very comfortable for staying for a full week. 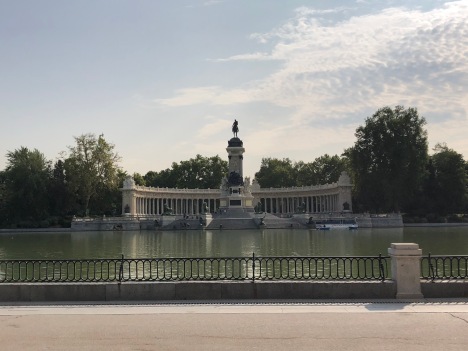 What to Do: There is so much to do in Madrid! But it’s also nice to do nothing and just walk around seeing various neighborhoods, dipping into tapas bars and shops as you go. If you go during summer, you will definitely need to build in time for a siesta in the mid-afternoon when the day is at its hottest temperature (in late August it was around 90-95 degrees F). 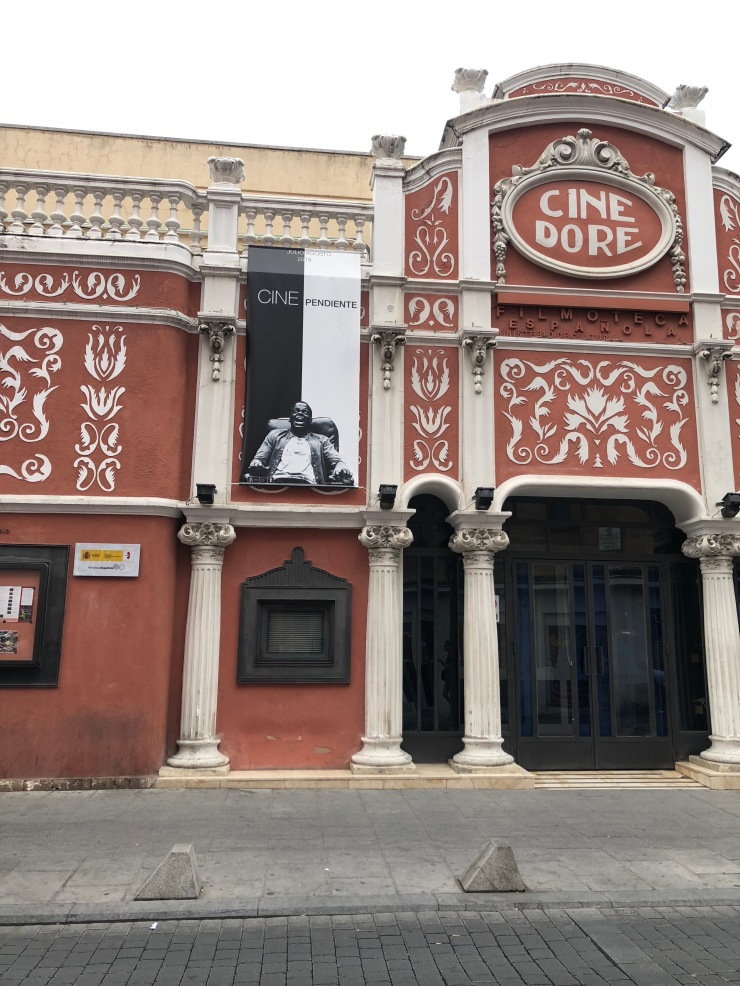 Explore the neighborhoods. Wander around Malasaña, Chueca, and Las Huertas. Find an empty table in a plaza, get a drink, and just hang out. Lavapies, near Huertas, is a bit more of a dingy neighborhood, reminded me of the East Village a bit (not unsafe, just not as gentrified perhaps?). Lots of people hanging out around here, and feels very local/not touristy at all.

Prado – This place is massive! 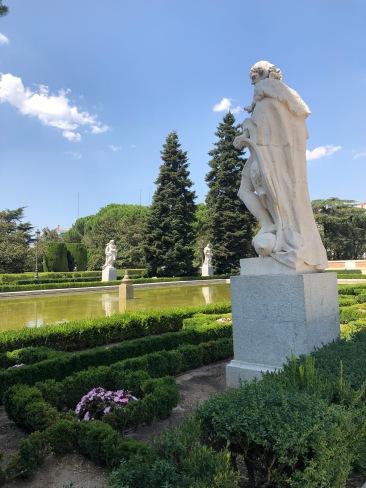 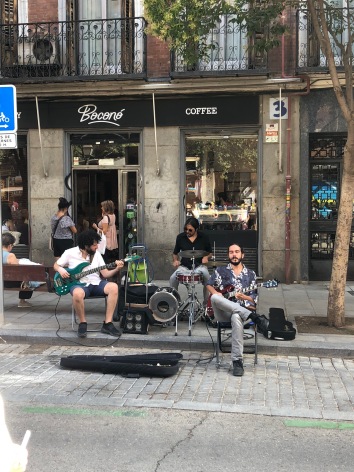 blues music outside the cafe 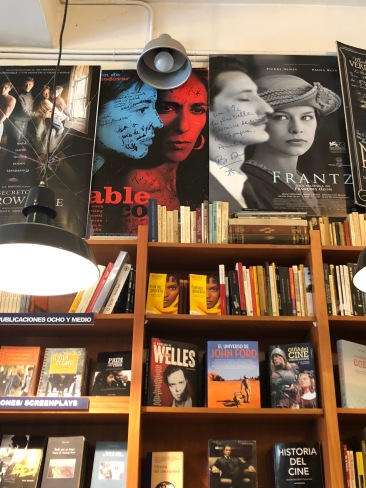 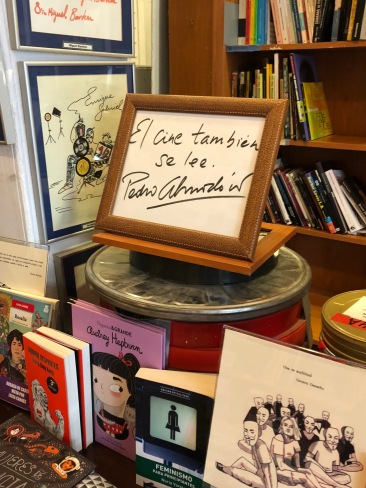 All I Did Was Eat & Drink in Madrid!

It’s not super expensive in Madrid (especially compared to France) so it’s easy to eat (and drink) well for not much money. Also, it’s Spain so people tend to eat lunch and dinner later (which I love). Expect to eat a late lunch and an even later dinner (like after 9 pm). I was thrilled the first day to eat lunch around 4pm and not be the only one dining at that time! Check out Culture Trip for recommendations by neighborhood and type of restaurant/cuisine. I found a lot of good spots through this site for Madrid as well as in other cities. It’s also common to see people drinking often during the day in Madrid – the Spaniards seem to drink a lot, though not to the kind of excess you may see in the US. The wine and beer are good and generally not expensive! 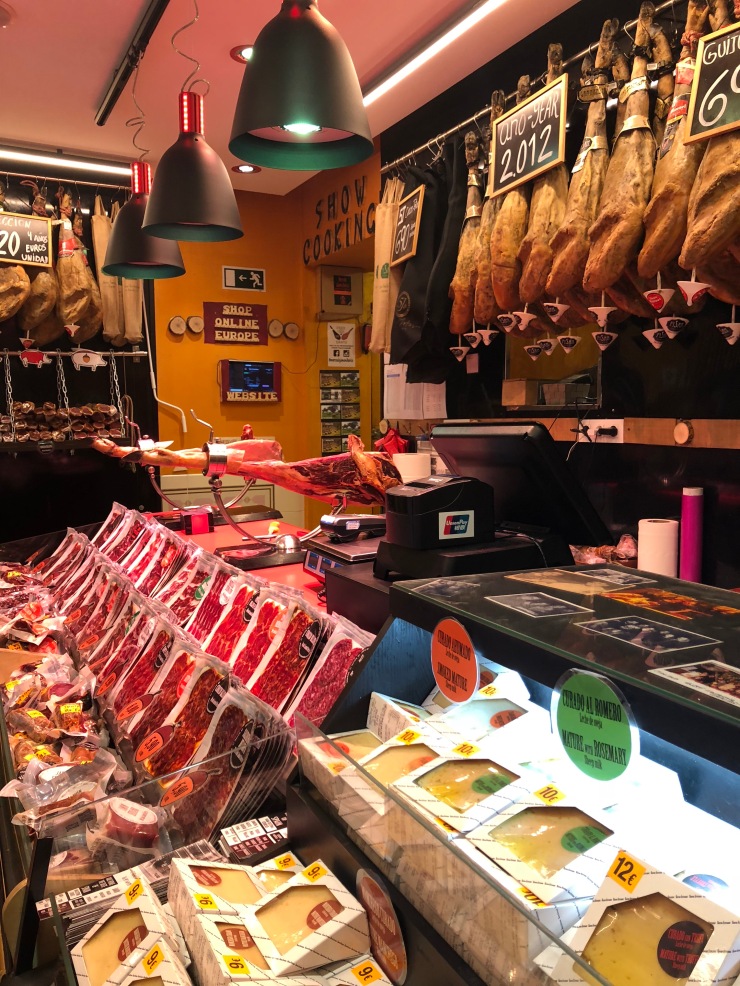 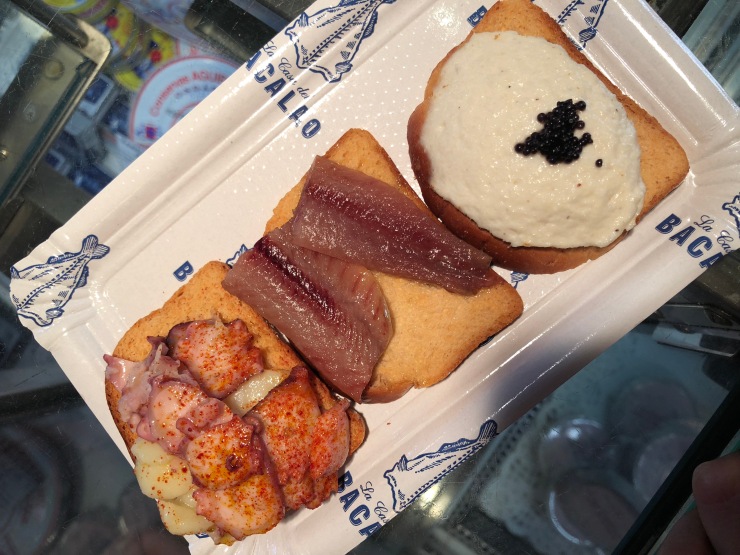 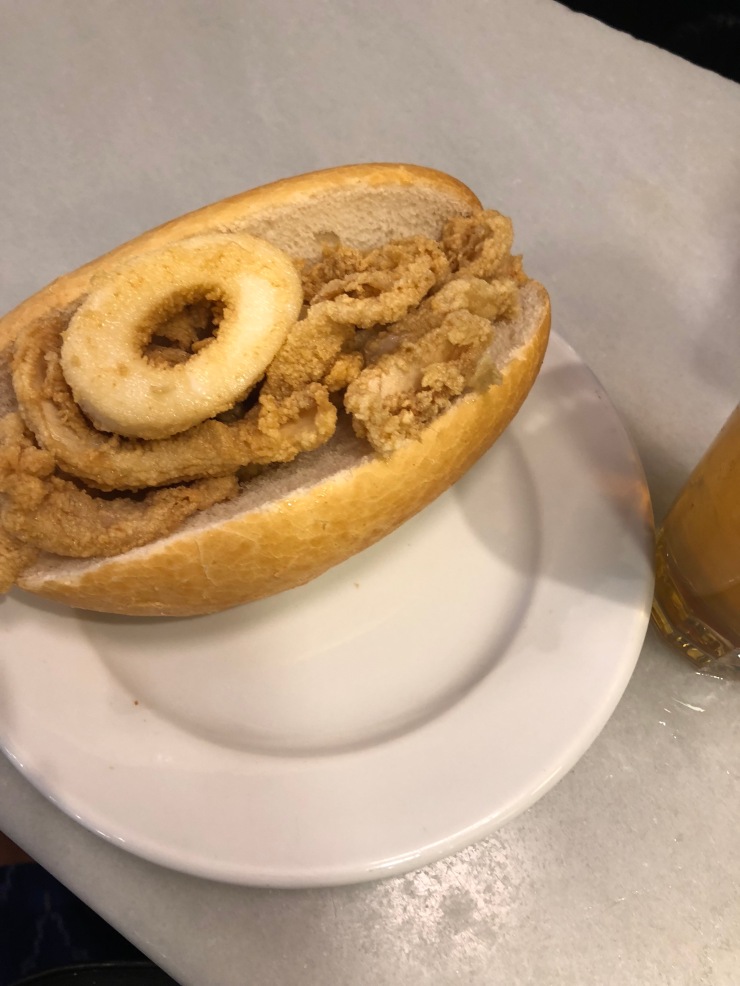 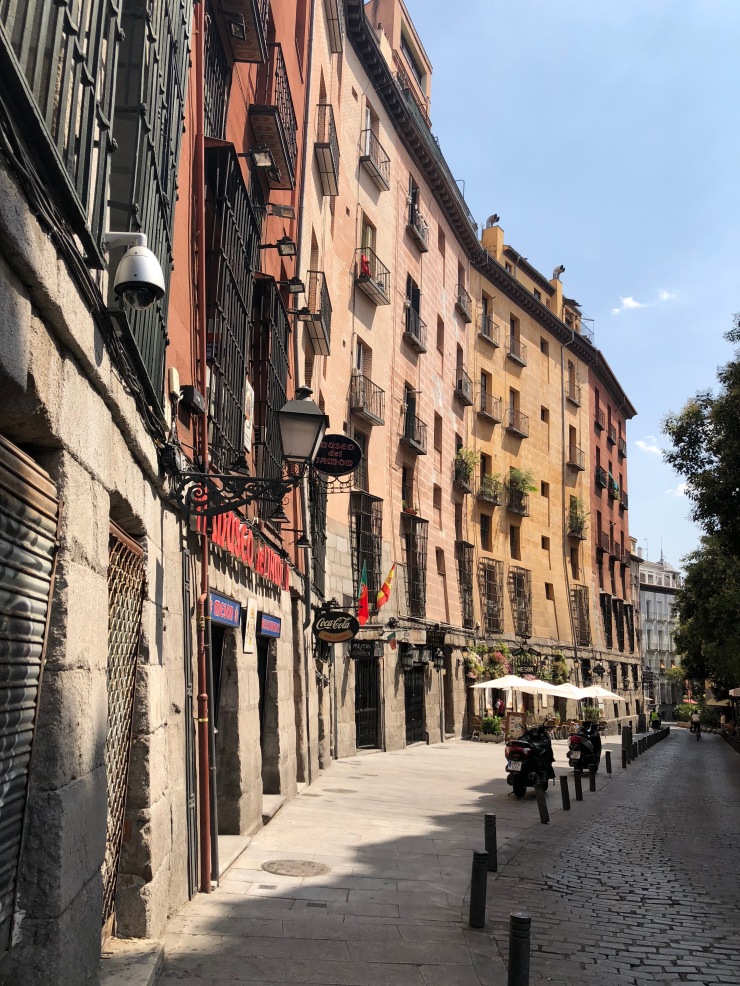 Chueca – I loved this neighborhood. It was a 15-minute walk from my hotel with a very low key vibe during the day/evening and more of a party neighborhood late at night.

Malasaña – Reminded me a lot of the LES/East Village. Lots of really good tapas restaurants as well as non-Spanish food options here such as juice bars, healthy options, coffee shops.

Huertas – Similar to Malasana (has some of the same boutiques). This neighborhood was near to my hotel and good at night for drinks/tapas.

Gran Via – I didn’t spend much time around here because Gran Via was completely under construction while I was in Madrid and it was quite unpleasant walking around. It’s Madrid’s major boulevard and probably will be nicer when it is redone!