My last six days in Bali were the easiest to plan. I knew, without a doubt, that I needed a place to relax and reflect and just BE. Those six days would mark the end of my travel in Southeast Asia after seven months. While there was a part of me that was looking forward to going home and taking on the next phase in my life, there was an even bigger part of me that did not want to go home. That wanted to linger in Indonesia just a bit longer. And so for those final days, all I wanted to do was linger. And Ubud appeared to be the best place for all of this reflecting and downtime.

Initially, I thought about skipping Ubud. I’d heard how touristy it was. How busy. How it was full of souvenir shops and western food and, after five days on the quiet Gili Islands, I wasn’t sure if I would like it. Still, it felt like a miss to spend three weeks in Bali and never go to Ubud. My friend who had just been in Bali promised it would be jungle/woo-woo/yoga vibes and that sounded exactly like what I wanted.

And so I made my way from Gili T back to Padang Bai on the fast boat with a planned transfer to Ubud. When I arrived in Padang Bai, it was a total mess. I kept following the people with the signs from our fast boat company, but it was hot and confusing and crowded. I just wanted to get into my transfer vehicle and get the hell out of there. After weaving through SUVs and vans, I was taken to what supposedly was my transfer. The driver didn’t have any of the boat company’s branding and I was skeptical. Was this really my transfer? Was I about to get scammed? I was hot and tired and just wanted to get to my hotel in Ubud. I was OVER feeling like I was getting scammed left and right. This is what I really disliked about all this traveling. But, at this point, I didn’t care enough to argue it out. I threw my bag in the back of the SUV and waited for the rest of the passengers. A very nervous Korean girl joined me. She was quite concerned about getting scammed on this SUV ride. I shrugged my shoulders and just smiled. There was nothing else I could do (or that she could do at this point).

I was warned that the ride would take up to three hours – which seemed odd because it looked like a 90-minute ride on Google Maps – and I was hungry. So while I waited for the rest of the passengers, I walked over to a lady selling fruit and grabbed a plastic shell container of raw coconut. This would tide me over until I got to my hotel at least. I managed to eat all of the coconut before we got crammed into the SUV – a family of four, the Korean girl, myself, and some random Balinese guy. Awesome.

About an hour into the car ride, I DID NOT feel okay. I was freezing and started to shiver. It was not just the AC blowing on me. No, this felt strangely familiar. Like the shivering I encountered in Thailand when I got sick from eating some street meat. I had a headache. I couldn’t get to Ubud and get out of that car fast enough.

When we arrived in Ubud, our driver let us out at a supermarket that happened to be extremely close to my hotel. I felt like crap and was fortunate for a short walk to my hotel where I would just be able to lay down. But, of course, it couldn’t be that easy. After grabbing my backpack, I was immediately asked by four men IN A ROW if I wanted a taxi. After saying no, quite rudely to each one (sorry, I was ill), I started walking to my hotel. I quickly learned that in Ubud it would be typical to be asked if I wanted a taxi about every 100 feet or so.

By the time I left Ubud, I was ready to scream at these taxi drivers. It was possibly the least relaxing part of being in this part of Bali.

When I arrived in my hotel room, I threw all of my bags on the ground and crawled into the bed. Even though it was hot outside, I left the AC off. I was still shivering so much that I actually put on more clothes. This was not good. This was not how I envisioned the final stretch of my trip, my final days in Bali.

After a solid 16 hours in bed, however, I felt remarkably better. I cursed myself for buying that coconut – it must have been the coconut – and decided to get a jump on what I would do over the next few days in Ubud.

Although I did some research on things to do in Ubud, I ultimately did a whole lot of nothing. It was the end of my trip. I was sick of tour groups and being a tourist. I was sick of hiring drivers to take me around for what typically was a disappointment. I didn’t want to spend my time or money this way. That first morning, I walked over to the Monkey Forest Sanctuary, which happened to be quite close to where I was staying. This sanctuary is quite large and, as expected, is full of monkeys. I was a bit nervous about the monkeys, to be honest. Signs everywhere indicated that people should not feed the monkeys or make direct eye contact with the monkeys or touch the monkeys. And if a monkey should jump on you, you should stay calm and not run away or freak out. I was not so sure about this.

Because I actually read the signs, I behaved appropriately in the sanctuary. No monkeys jumped on me. I observed them and took photos and walked around and it was fine. BUT there are a lot of people – A LOT – who totally ignore the rules. Who feed the monkeys or tease them or freak out  – and it was because of these people that I couldn’t wait to get out of this place. I resolved at that moment that I was done doing touristy stuff. I couldn’t stand being around these people, waiting 10 minutes while some girl posed for Instagram photos or avoiding obnoxious backpacker bros.

And so I DID NOTHING in Ubud. And it was spectacular.

Sure, there are hikes and rice terraces and waterfalls and water temples and Balinese performances and a whole bunch of other things you can do in and around Ubud. But I also had this great little hotel set back from the main road with a quiet pool. I had chosen my hotel, Maple House, because it had been reviewed as being super quiet and relaxing. It was also a short walk from The Yoga Barn, an Ubud institution. And so the rest of my time in Ubud was spent eating, relaxing, writing, and doing yoga. Everyday. I went to bed early and rose early so I could make it to 7am yoga classes at The Yoga Barn. I had stopped drinking when I got to the Gili Islands and continued to not drink in Ubud. I ate mostly vegan – it’s quite easy to do in Ubud – and I had a lot of awesome quality time for myself. I found three great restaurants and only ate there, becoming a short-term regular. I took a morning walk through the Campuhan Ridge which offers vast views of lush jungle and is not far from town. I treated myself to a four-hour spa package. I browsed the shops and drank jamu or ginger drinks every chance I got. And somehow I managed to not drink coffee during my stay in Ubud! (Okay, I had it one morning…)

Sure, Ubud is this woo-woo/yoga/jungly tourist destination. But it can also be this place where you can just quiet down and relax and reflect and be in awe of the beautiful jungle surrounding you. I’m sure it would have been nice to have seen some waterfalls or gone hiking outside of the town or whatever. But it wasn’t what I wanted or needed at that point in my trip. What I needed was time to myself – quiet and reflective time – before I made my way to Korea and then back to the US. I don’t regret not doing anything in Ubud – frankly, I can see most of what I missed from all of the Instagram shots of the Tegallalang Rice Terraces (and I know what you don’t see in those photos is 40 people standing back until they can get the same shot where it looks like no one else is around). The overtourism that I had experienced throughout my self-care sabbatical really peaked in Bali – and I knew I wouldn’t be missing out on anything by skipping these sights. Instead, I listened to my body and rested and stayed still and moved only to find delicious food or take a yoga class.

Self-care is ultimately doing what is best for you – and your body and mind – and those final days in Bali seemed to be the perfect way to end my self-care sabbatical. Even though I technically had a few days left in Korea before returning home, I saw this time in Ubud as the end. I had dreamed of finding myself in Bali at some point and here I was. I had longed for time to reflect and quiet my mind and I had found the perfect conditions for this in Ubud.

So what is there to do in Ubud if you don’t want just do nothing? More on that later! 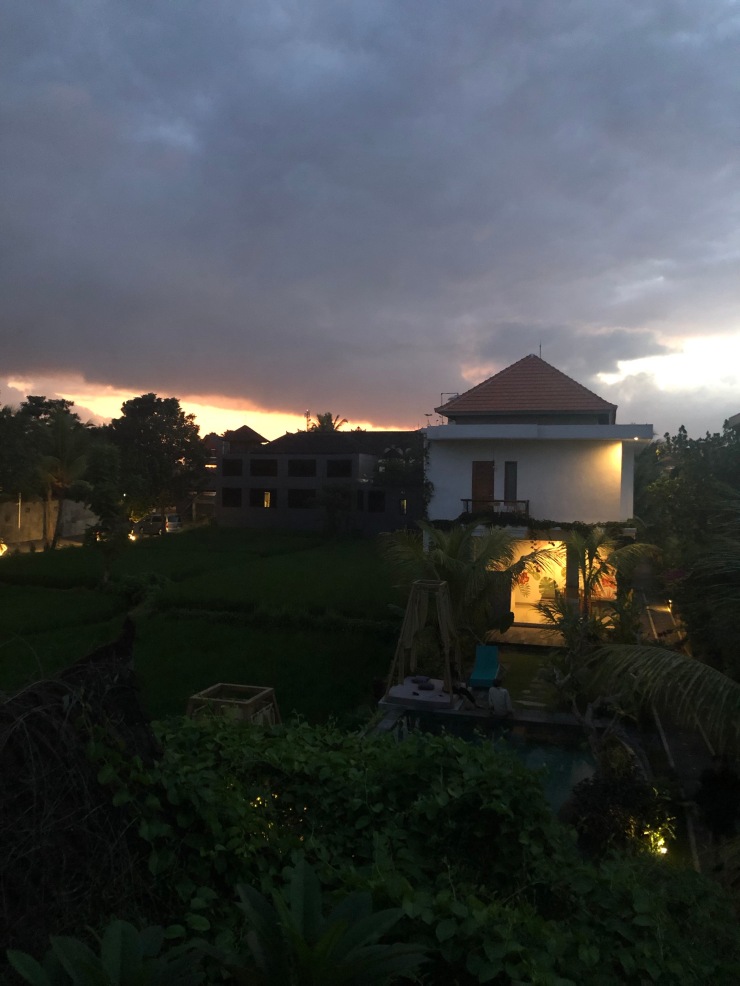