Before I left for Italy, most people asked me about my itinerary and the cities I would be visiting. Since we opted for less popular-with-Americans locations, I generally lost people after Venice. Often when listing the places, I didn’t even mention Sacile (pronounced Sah-chill-ay) and referred to it as “a small town about 45 minutes outside of Venice”. Then I had to explain that my friend Meghan’s parents were living there, which is why we were going to this unheard of town, and I’d probably lost their attention by this point anyway.

My friend’s parents have been living in Sacile for the past few years; my friend’s mom works at the nearby Air Force base in Aviano. Meghan, my old roommate and travel bestie, has been to Italy many times to visit her parents in the five years they have lived there, but there time in Sacile was coming to an end (they are leaving in August), so we decided to plan our trip to Italy so that she could get in one more visit. And why wouldn’t we want to go to Italy?

Sacile is very quaint and charming, full of delicious restaurants, cute shops, and very friendly residents. It’s also located not too far from other places worth checking out such as Lago di Barcis and Prosecco Road. I’m not sure that Sacile is high on the list of places to check out in Italy, but it’s a lovely place to make your home base in the area if you are planning to this region (Conegliano). In summertime, it seems there are markets and festivals in all of these towns every weekend so there will definitely be a lot to do if you visit!

Getting There: Sacile is just north of Venice, about 77km away. We rented a car from the Venice Airport and drove up there. There is also an option to take a train between Venice and Sacile, which takes about 90 minutes.

Where to Stay: Since it’s a small town, the hotel options are a bit limited. There are a couple hotels located in the middle of town – Hotel Due Leoni and Hotel Bar Italia. Hotel Due Leoni is located on the main piazza and seems to book up quickly. Because of its location, I think it would likely be noisy staying there, especially on weekend nights when the piazza is filled with lively crowds. We chose Hotel Bar Italia, just a few blocks from the piazza, and it was nearly perfect for our short stay. In fact, we may have been the only guests staying there! There is private parking for the hotel guests, which is very important as street parking is tough in town. The hotel staff (namely, Luca) is super friendly. There is breakfast served every morning in the cafe downstairs. The room we had was very simple, with a newer bathroom and great AC. The only complaint was the lack of outlets which was a general complaint in Italy. The only thing that could have made the hotel better was to have a pool! It was SO HOT when we were in Sacile, would have been a nice way to cool off! There are also some agriturismos just outside of the town which do have pools and offer another option if staying in the area (check out La Pioppa Agriturismo). You may also find some places on Airbnb in the area.

Things to Do:
Sacile is a pretty sleepy town. When we first arrived it was midday and very hot. Everything was closed for reposo and we nearly had the streets to ourselves. After taking our own time to rest that afternoon, we ventured back out in the early evening for aperitivos and the town was coming alive. By evening, the piazza had turned into a lively scene as bars and restaurants filled up.

Outside of Sacile there is also much to do so it’s worth having a car to go exploring:

Prosecco Road – Conegliano is Italy’s Prosecco region. It’s stunning here (dare I say more beautiful than Tuscany) with rolling hills of grapes set among small towns. The day we visited, a Sunday, was very rainy and so many places were likely closed due to the weather. Fortunately we found a few wineries to visit. At both places, we were the only people there! Much less crowded than being somewhere in Tuscany, easy to just arrange a time in advance to do a tasting or even just walk in. The first winery we visited, Garbara, was very small. We tried a few different proseccos here and, had the shipping costs not been so expensive, I likely would have bought a case. The second winery, Fasol & Menin, was on a much larger estate where the owners often host concerts (they are big jazz fans). We learned a lot about prosecco grapes and the region while here, as well as about the fermentation process (prosecco is not bubbly until its 2nd fermentation). There were two proseccos to try here and we did end up buying a case this time, which we brought home with us rather than ship. We couldn’t pass it up!

Before leaving Prosecco Road, we stopped for lunch at Fos de Marai. The restaurant is set up in the hills and has gorgeous views of the vineyards below.

The food here was also delicious and we enjoyed some pasta and meat dishes (try the sausage), as well as very good onion soups.

best way to end a meal

They have a grill inside where they cook up various kinds of local meats and fish, it smells amazing!

Lago di Barcis – This is about an hour drive from Sacile. Beautiful lake and small town, perfect for spending a summer afternoon. The town feels more like it belongs in Austria or Switzerland, than in Italy! The lake is the most incredible blue-green color of which I’ve never seen before (outside of Italy) and surrounded by mountains. We spent some time wandering around the town – getting spritzes, enjoying the views, and taking too many pictures. We ate lunch at a hotel in town – very good food but too hot in the restaurant (remember the Italians don’t really believe in AC).

After lunch we went for a swim in the lake which was a bit cold, but also quite refreshing after being so hot all day. This is really a perfect place to come for a picnic and some swimming! After our swim, we drove to Sorgenti del Gorgazzo and saw the grotto there (look for Jesus at the bottom). It was a little strange…we had spritzes at the restaurant there so was a great place to stop!

Eating & Drinking in and around Sacile:

Porca L’Oca – One of two Michelin-starred restaurants in Sacile (the other is Il Pedrocchino, next to Hotel Bar Italia). The restaurant is very cozy and charming inside, full of these wood-carvings done by one of the owners. There is also a garden/bar across the street where you can enjoy a cocktail outside. However, it was too warm the night we went there so we went straight-away to the restaurant for our drink, ordering a round of prosecco before ordering. The restaurant is run by an adorable, chic older woman who was incredibly helpful in making sure we had the best possible meal. By far one of my favorite meals of the trip! We were so full, but couldn’t stop eating! And they played Michael Jackson songs throughout the meal! 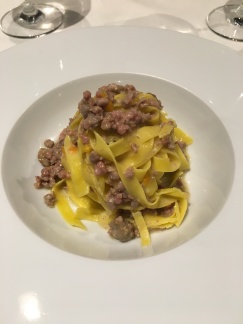 this cacio e pepe was incredible

Bar Trattoria Cavour – Lovely restaurant with a beautiful garden area. Came here for lunch and were not disappointed. I had the antipasti plate (sardines, squid, sea bass, octopus) – everyone else had pasta which was delicious. Of course, also had local prosecco. 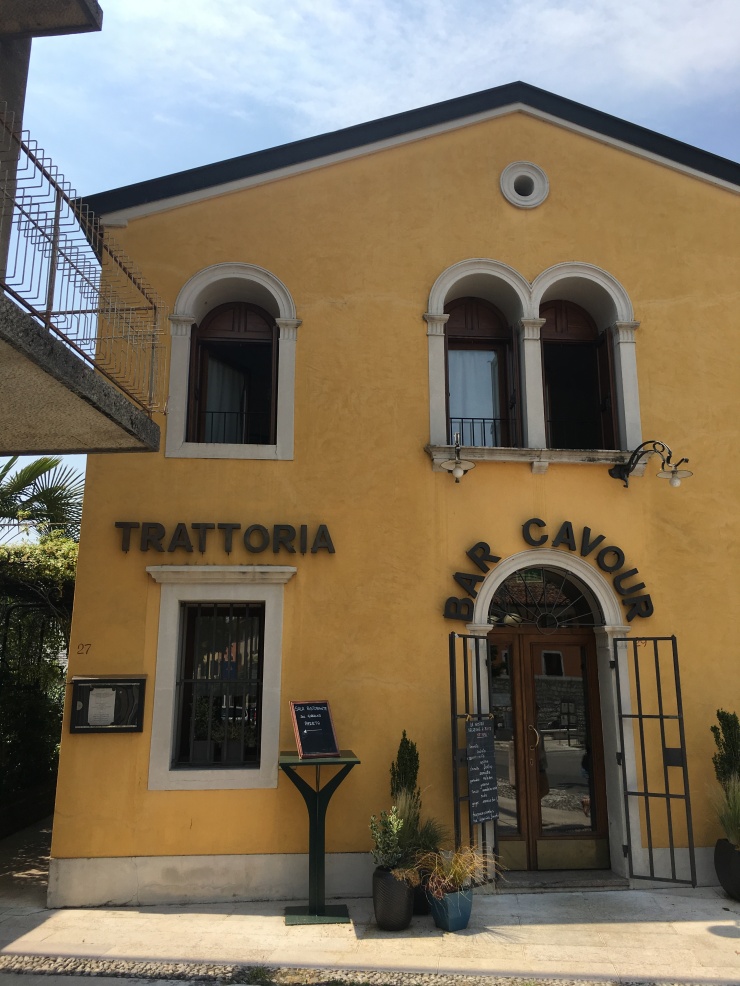 Pizziwine – Pizza/sandwich shop located near the piazza. Very creative mini-pizzas available, good for a snack with your aperitivo. We had a round of spritzes here (of course!) before going to dinner.

Pizzeria Ristorante Rover – This restaurant in Caneva is up in the mountains and has fantastic views of all of the surrounding towns. We were able to sit outside and enjoy this view for our entire meal. The food here is great and the place is very popular – it was totally packed by the time we left. We had a pizza with sausage, some gnocchi, and a giant salad. And local wine of course!

the gnocchi was delicious 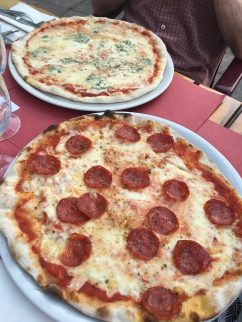 and pizzas are excellent

Bicycle Bar – Near the piazza in Sacile, great little bar that almost seems inspired by Hogs & Heifers with bras hanging from the ceiling!