Our third stop in Italy – Cortina d’Ampezzo! Click here for more about Sacile and Venice

Cortina d’Ampezzo is in the Dolomites, a beautiful ski town that is also stunning in the summer. Summer is a nice time to visit since it’s low season and a bit cheaper. There’s plenty to do in the summer and the weather in late June was rather mild (70s, 80 during the day). It also cooled off at night which was nice. What is interesting about Cortina is how non-Italian it feels most of the time. It’s very close to Austria, as evidenced by the architecture, and it’s possible to hear German spoken as well as Italian. When we went hiking, many of the signs were in both Italian and German.

Getting There: Because it’s in the mountains, there are plenty of winding roads to take you into Cortina. I cannot imagine having to drive here in the wintertime! We had a rental car which we drove from Sacile (actually Valdobbiadene) to Cortina. It was a rather easy drive on the local roads and we had a nice stop at Lago de Santa Croce to take some photos (it is so stunning here).

When we left Cortina, we drove back to Venice and returned our rental car. We took the autostrada on our return trip which was much faster than taking the local roads where we often got stuck behind slow vehicles. It is nice taking the local roads to see the different towns along the way though with their chalets and mountain backdrops!

We stayed at Hotel Lajadira which was just outside the center of town. There are plenty of hotels in town and more are scattered along the roads going into Cortina. This was one of the cheaper places I found that looked like it had nice accommodations, including a spa! Many of the hotels in the area are very rustic/chalet-looking places which felt a bit outdated. Lajadira has a bit of that aesthetic, but also has a brand-new wing which is more modern. Unfortunately, our room was not in the more modern section. We had a room for four which meant a double bed and a pull-out sofa. Sofa apparently was not super comfortable.

The breakfast at this hotel is incredible though. Definitely the best spread out of all the hotels we stayed in during this trip. There are a lot of options, as well as some pre-packaged foods that we took for snacks (especially good when going hiking).  There is a restaurant on site open for lunch and dinner, but we did not eat there. Looked like limited menu anyway.

The spa is really nice, it’s part of the new section of the hotel and has a pool, two saunas, and a steam room. There are also some lounging areas inside and outside. It’s possible to get spa services as well, though we did not look into the prices for these. Really nice to have the spa at the hotel, especially after a day of hiking and when it was raining and we just wanted to relax. One disappointment was that the hotel did not have AC, because it generally doesn’t get that hot in Cortina, I don’t think many of the hotels offer it. Just a warning.

There was a nice walking path near our hotel that took us directly into town which was nice alternative to driving (and having to find parking in town). The parking at the hotel was very easy.

Go hiking! The main place is Tre Cime, a very popular place for hiking. It is possible to do a day hike here and it’s not terribly challenging either which is why it is so crowded. The drive to Tre Cime from our hotel was about 45 minutes and you will drive up some steep mountain roads getting there. It’s also impressive to see cyclists on the roads, I cannot imagine trying to ride a bike up the mountain! It costs 25 euro to park here. We spent about 6 hours there in total, arriving around 9:30am.

The hike is about 9km. Parking was very full by the time we arrived so would encourage you to get there earlier! It will also be slightly less crowded, I think. There are rifugios along the way, including one at the beginning of the hike near the parking lot, where you can use the bathroom and buy food/drinks. There are a lot of people doing the hike, likely more crowded on a weekend (we went on a Monday). Very clearly marked trails, though you can easily follow everyone else! There are inclines which can make it difficult sometimes going up and down with many rocks, we didn’t have any hiking poles but many other people did – would have been nice to have!

We stopped at Dreizinnenhutte (see – German!) for some beers and to eat snacks we’d brought on the hike. This was the turning point for us, rather than try to follow another trail back to the parking lot, we basically went back nearly the same way we’d came, taking a slightly alternative trail. After the hike, we drove to Lake Misurina (on the way to Cortina) and stopped for a gelato and spritz. It’s very pretty here and worth stopping for a bit!

Explore the town – Cortina is rather small, but does have some nice shops and boutiques worth checking out. We had one rainy day where we spent a few hours in town walking around before heading into the mountains.

Take a cable car up the mountain – A very pleasant alternative to hiking! Unfortunately, we did this on a rainy day so it was quite cloudy and the views weren’t that great. The cable car, Funivia Faloria, is located in town and there is parking close by. The trip up the mountain is really spectacular (unless you are afraid of heights and then maybe you don’t really want to look out the window). There is a ski area up here, which was clearly empty when we were there in June, and a nice restaurant at Rifugio Faloria. Seriously, this was a surprisingly delicious meal.

Eating & Drinking in Cortina (is delicious!):

If you visit Cortina in the low season, some restaurants may not be open so worth checking in advance. Restaurants are generally more meat-heavy here and you will see some Austrian influences in the menus. 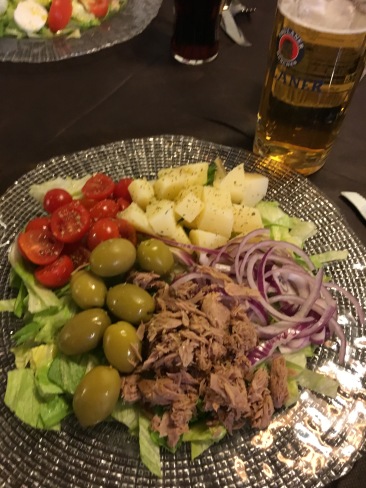 Il Ponte Pizza – Was very popular with tourists the night we went there. Located in town, has a good mix of pizza, pasta, and hearty salads. We all ordered salads and then one pizza to share. Great for an easy meal, especially with a bigger group.

Il Vizietto – Located in town, came well recommended online. It’s a very cute little restaurant with very good food. Menu is pretty meat-focused though we ordered seafood and it was very tasty. The presentation is stunning! Only downside was that the service was very slow. We had a delicious local wine (a Kerner from the Alto Adige region), an amuse bouche of ricotta and pork mousse, steamed octopus to share, sea bass with potatoes and veggies. 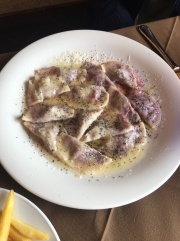 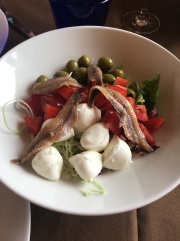 Rifugio Faloria – Located at the top of the mountain, very impressed as we had low expectations for our meal here! Of course we had a round of spritzes! And then ordered a bunch of things to share: beetroot ravioli with poppyseed (a local dish that you have to try), sauerkraut (so good, it rivaled my Oma’s recipe), polenta with mushrooms, and a salad with anchovies and olives.

Ristorante Ospitale – Highly recommended! One of our favorite meals during the trip! The restaurant is just outside of town, a bit in the mountains. About 20 minute drive from our hotel. While it seemed a bit far for dinner, it was totally worth the trip! The views and surrounding landscape are beautiful and we spent a few minutes snapping photos before going into the restaurant. 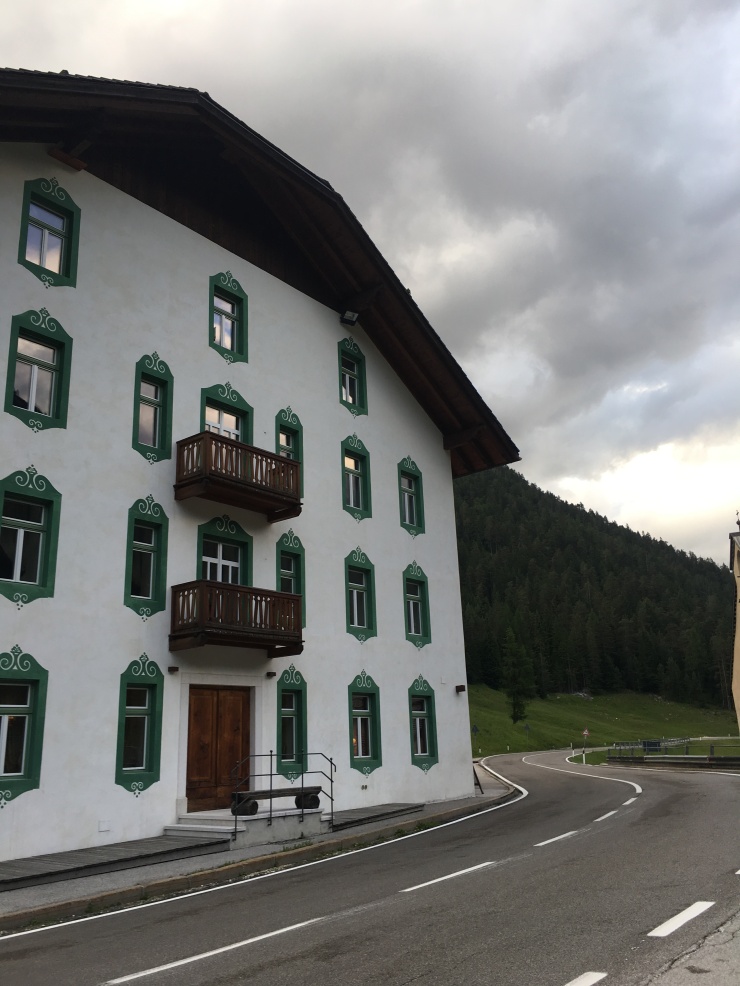 The restaurant itself is very pretty, it’s located inside a rifugio where you can stay overnight. Our meal was fantastic! We had two bottles of the house red, a small selection of cheese with mustards (basically spicy jams – strawberry, orange and green tomato), spelt tagliatelle with chard and ricotta (wowowowow) – we all ordered the same pasta and destroyed it, and green beans and spinach for sides. Then we had scarpino for dessert, as well as ice cream with hot raspberries (so good and so simple). Do not order the buckwheat cake 😉

Other Recos we didn’t try:

Ristorante Al Camin – Supposed to very good, located on the way up to Tre Cime. Unfortunately closed while we were in town

El Briete de Larieto – This is one of Massimo Battura’s favorite restaurants in Italy, located on an agriturismo along the way up to Tre Cime. 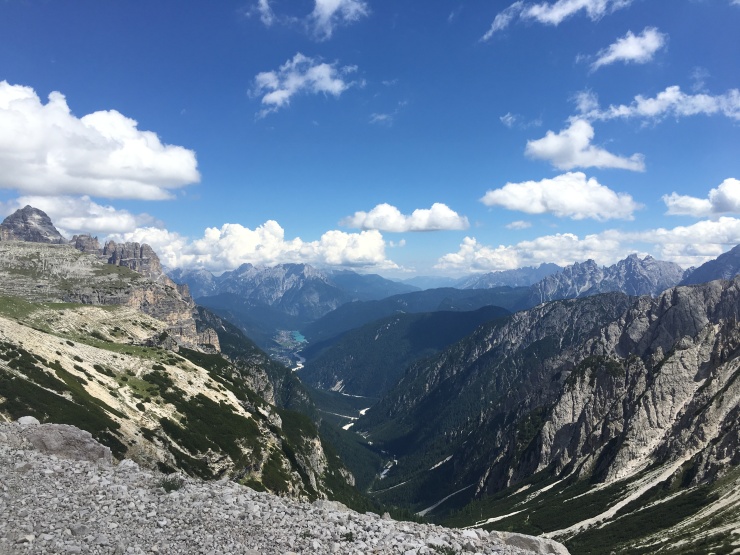