It was an easy choice to make Amsterdam my first destination of my Self Care Sabbatical. I had always wanted to visit the city and it’s an easy direct flight from JFK to Schipol on Delta. It would make a simple starting point in Europe as I could easily get to other parts of Western Europe quickly from there. And Amsterdam always looks so charming in photos..it truly charmed me on my first day.

I spent a total of 4 nights in Amsterdam, which seemed to be the right amount of time to explore the city at a leisurely pace. I could have also done a day trip from Amsterdam to a nearby town but chose to spend the entire time in Amsterdam as I would be exploring a few other towns in Holland after leaving the city. I never felt rushed to see things, rather I felt like I could fully enjoy the city and see a lot. Also, it was incredibly hot while I was there so it was also nice not to feel rushed when you’re sweating all the time!

On my first day, after settling into my hotel, I spent the afternoon exploring the Jordaan neighboorhood and the center of town. I had signed up for a free walking tour that began at 4pm (probably my favorite way to kick off my visit to a city), so I had a few hours to kill strolling around. I popped my head into various shops and “museums” like the Tulip Museum and the Cheese Museum (glorified shops with some kind of history lesson), and grabbed a sandwich and a beer in the shade. More strolling found me near Stubbe’s Haring, known for their raw herring served with onions and pickles. I had to try it! Also, it made a convenient place for a stop as I was tired and sweaty.

From there, I went to meet up with my tour at Dam Square. The tour was offered by Free Walking Tours Amsterdam and was incredibly helpful. I think these tours are a great way to learn a little more about a city from a local and serve as a nice way to get oriented to a city. Our guide, Peter, told us a lot about the local culture in Amsterdam and took us into some secret gardens and courtyards in the Jordaan. He even took us to his home/art gallery! We extended the length of our tour a bit so we could visit the Red Light District and when our tour was over, I felt that I had seen much of the city in just my first afternoon.

I stayed at The Tire Station located outside of the city center and I am so glad I did! While the center is very charming and beautiful with its canals, it is also incredibly touristy. After that first day, I was ready to get away and be in the more local areas. My hotel was located just next to Vondelpark which was perfect for an early morning run or bike ride. There were trams nearby so it was easy for me to get into the center by public transit as well. I felt like I got to see a whole other side of the city by staying here! The staff was also incredibly friendly and helpful, they offered bikes for rent (which is where I got mine), and they had a free wine Happy Hour every day from 5-6pm. Perfect for a break after biking around in the sun!

Getting Around: I highly recommend renting a bike while you are in Amsterdam! It is the best way to see the city. I was a little nervous at first because the cyclists are a bit aggressive, but I found it much easier than biking around Brooklyn! There are bike lanes everywhere so it feels safe, and having the bike makes it easier to visit further away parts of the city on your own. I felt like I was able to see so much just by being on the bike. The tram system is also very easy to navigate and I used it for the first two days before I rented the bike. Plus, there are lots of great parks in Amsterdam (like Vondelpark) and it would be a shame not to ride around on a bicycle! 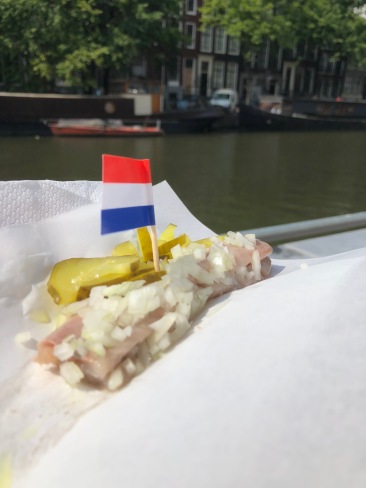 raw herring with onions and pickles

I ate a mix of traditional and nontraditional food while in Amsterdam. There were a few local dishes I really wanted to try, but I also wanted to try some of the other cuisines available in Amsterdam (there is a lot of Indonesian food worth checking out!). Rijsttafel (rice table) is the primary Indonesian meal you can get while in Amsterdam – it is a few different dishes and rice. And it’s delicious. I tried it at Kantijl en de Tijger, they offer a version for solo diners which was nice because I couldn’t have eaten that much food!