London – the last stop of my European Self-Care Sabbatical – was not my favorite place after the first time I went there. Sure, I liked it enough but I was not really looking forward to going back. Because I had to leave the Schengen Zone after staying through my 90 days, I had decided to book a return flight out of Heathrow to JFK and kill some time in the UK. (Translation: I was minimizing my time in the US before leaving for Asia.)

I don’t know what it was about London on that first visit that didn’t totally win me over, but the minute I was able to easily speak English with the Immigration officer at border control, I was thrilled. After 3 months in non-English speaking countries, I hadn’t realized how much I’d missed this. Sure, I had been speaking English in these other places (although I had really been trying to practice my French 100% of the time in October), but this was the longest I’d gone without being in an English-speaking country ever in my life. Suddenly I was thrilled to be in London! 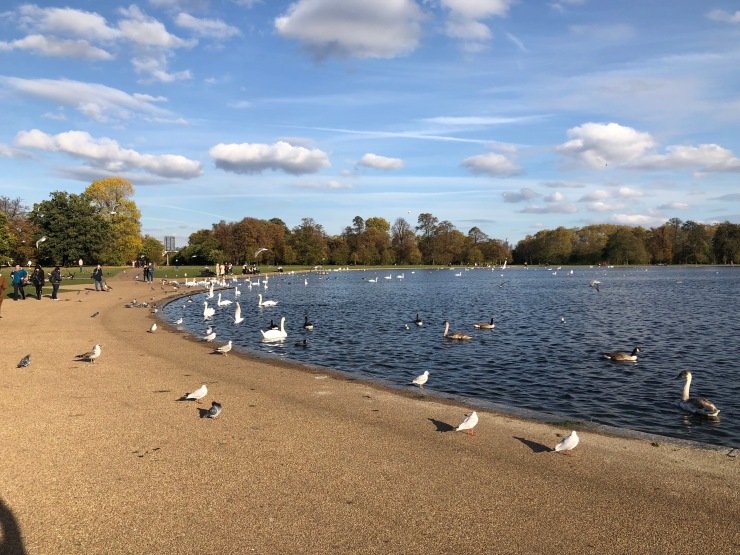 It also helped that I’d been there before. I felt like I could easily navigate the Tube (even with my giant suitcase) and I had a sense of where I was going. I was also lucky to be staying with a friend and seeing many more friends throughout the week, making it the perfect transition before a quick stop in the US.

But best of all, I had nothing really planned. There were a few sights I hadn’t seen during that first trip that I wanted to check out. I had to go to a few favorite restaurants (well, just one actually). Otherwise, I was just going to wander. The weather was mostly in my favor (I strategically planned my museum time around the rain), it was cool but not nearly as cold as it had been a few days earlier in Geneva.

I did, however, feel a bit underdressed. Everyone in London looked so autumnal chic and there I was in 1 of the 4 warm outfits I had available to me. I had really grown tired of my clothes after traveling for so long, especially the items that I’d been rotating through the end of October. When my friend invited me out to this cool live music event, I was wearing the same sweatshirt I’d been wearing nearly every other day since buying it in Biarritz. Did not feel cool enough to be at this event. Alas, these are the hazards of long-term travel.

I felt like I really got to see (and eat and drink) a lot during this trip to London and I left feeling like I actually really liked it now. It had grown on me. I got it. I could now really see the appeal. Before it had seemed so much like New York, but with a little more time (and especially time in South London) I came to really enjoy this city and look forward to going back (just maybe in warmer weather for a change).