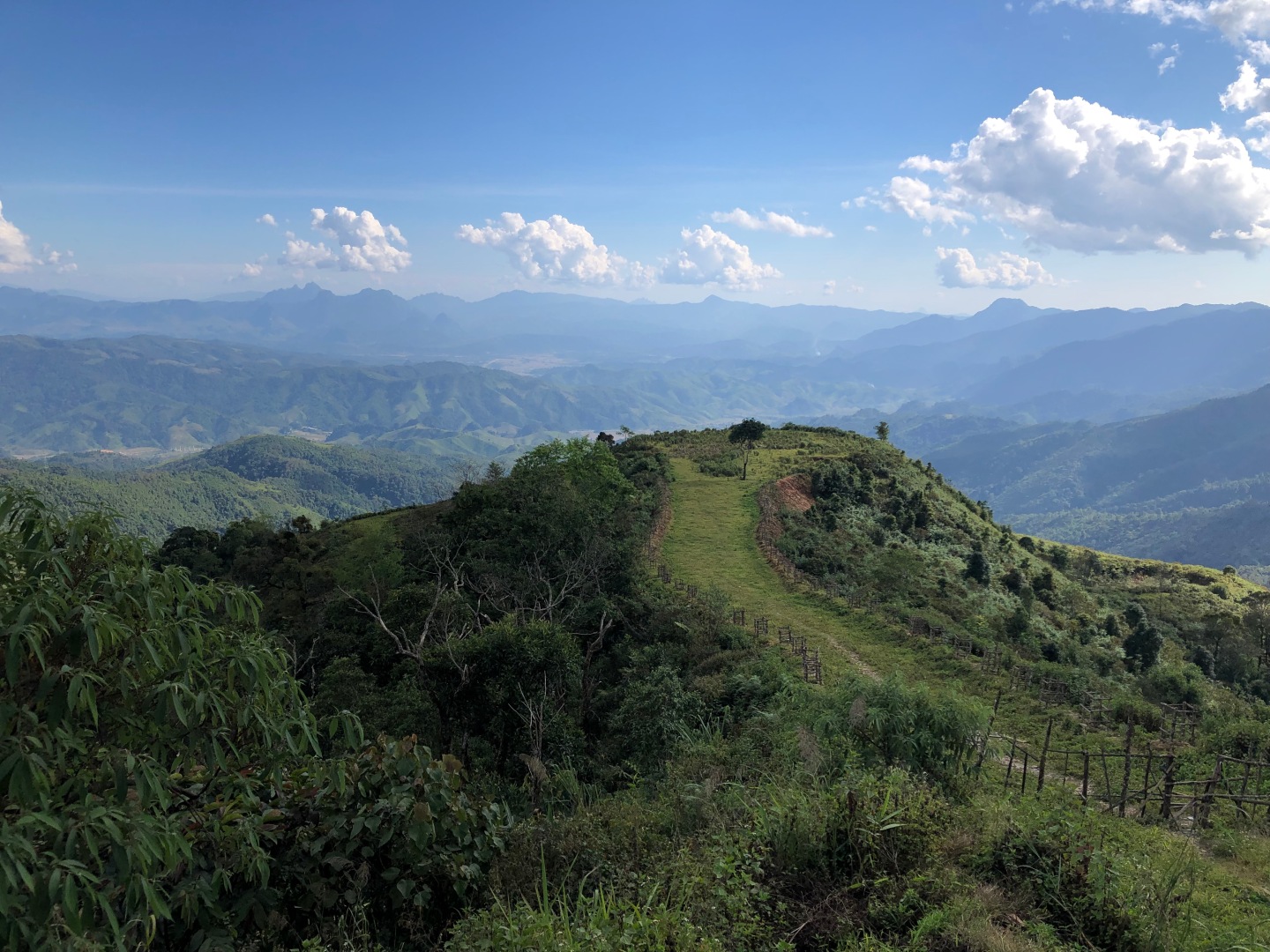 I was THIS CLOSE to skipping Vang Vieng. In my original plans, VV was a logical stop between Luang Prabang and Vientiane. The bus to Vientiane usually stops here so why not spend a day or two here? At least it would break up the bus ride a bit and give me something to see. But then, the more I read about the horrible buses and the dusty town that was VV, I thought about skipping it entirely. Flying from Luang Prabang to Vientiane would be easy, though much more expensive than taking the buses. But I would save time and hassle just taking a quick flight there. Besides, did I really need to go to VV? 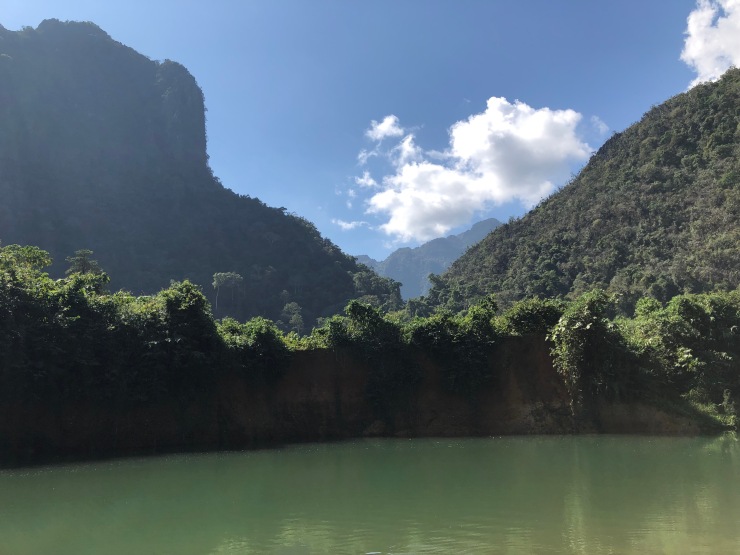 I wasn’t convinced though. Something was telling me not to skip VV, to give it a chance. I was spending a short time in Laos anyway, why not make the most of my time and spend at least a day in Vang Vieng? And the buses? Well, that would be part of the experience. I did the math and realized that I could probably spend less money in transportation and accommodation going to VV en route to Vientiane vs just buying that $100 flight from Luang Prabang (and I was right).

And so I booked a morning bus and planned to spend 2 nights in Vang Vieng. From there, I would be able to jump on another bus to Vientiane. Easy!

I was supposed to be picked up at my Luang Prabang guesthouse around 7-7:30am for my 8am bus. By the time 8:30 rolled around, I was still waiting. The owner of my guesthouse helped me out by making a few phone calls – soon, there was a tuk-tuk coming to pick me up. When I arrived at the bus station, I was told that my bus would leave at 11am. Soooo I had two hours to kill at this sad little bus station.

The bus was not very full, less than 15 people for the trip. The sound of very loud local music filled the bus for the first few hours. I did my best to muffle it through my own headphones as did the two Belgian travelers sitting across from me. At first, the ride wasn’t too bad (aside from the music). But then we hit the mountains.

This bus trip is known to be bad mostly because of the poor condition of the road between LP and VV. The road also winds its way through the mountains, climbing quite high on roads that are often unpaved and do not have guardrails. Try as I might, I could not relax on this bus. Every turn, every bump – I imagined we would be falling to our death at any minute. 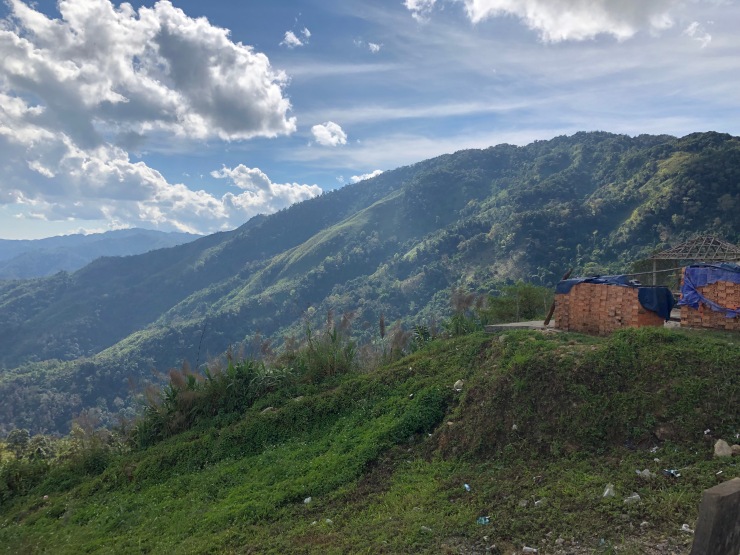 Despite the terror, the views are quite incredible and our bus stopped at one viewpoint for a few minutes so we could get out, take some photos, and kiss the ground beneath our feet. It was stunning, but I couldn’t wait for this ride to be finished. One look at the road ahead of us and I knew it would be painful.

As we got closer to VV, the road became dustier. Even the trees along the road went from green to a shade of grayish brown. There were cows everywhere along the road (most alive, but not all). There were honking motorbikes. After 6 hours, I just wanted to get off this death trap of a bus.

When we arrived in VV, it was exactly what I had pictured. Dusty. The streets were full of cheap backpacker hostels and restaurants serving a mix of Chinese, Korean, Western, and local foods. The town gets a mix of tourists which are reflected in the types of food available (and the language of the signs around town). I was glad I had decided to spend only 1 full day here. 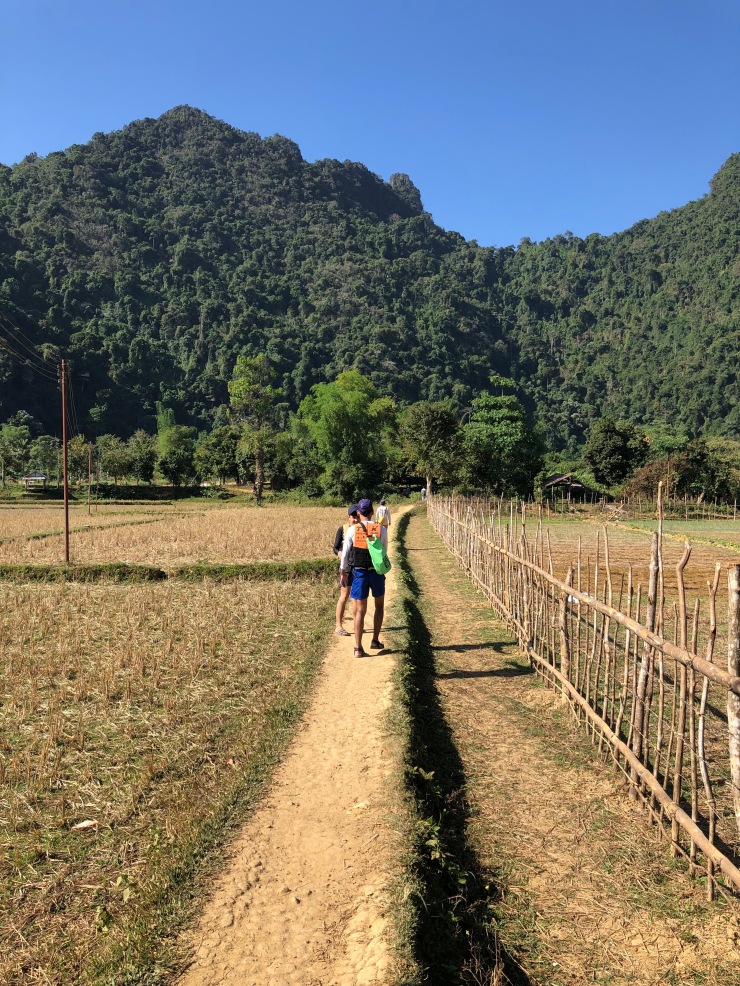 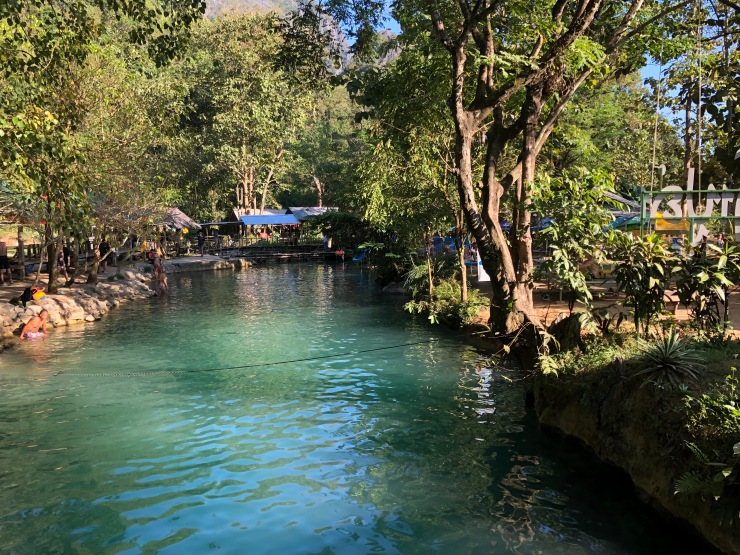 I can totally see the appeal of VV to certain kinds of travelers. You have to get out of town to fully appreciate the area – there are places to hike, climb, kayak, and bike and the landscape is quite beautiful. The town previously had a reputation as a backpacker party town, popular for going tubing down the river (stopping at the riverside bars along the way). While the tubing (and some of the bars) still exist, there’s more of a focus on other kinds of activities now. But if you don’t have a motorbike, it can be difficult to navigate around all of the sights in VV without doing some sort of tour. Since I had sworn off motorbikes (at least driving them myself), I knew I would have to find a tour for the next day. After a quick walk around town, I learned that all of the tour companies were offering the same general packages to the same locations. I skipped the notion of shopping around, found a decent looking tour company with a reasonable price, and booked a 1-day excursion. While It was not quite exactly what I wanted to do for the day (I thought I would never go ziplining again, but here I was), I had a very limited time to sort out my plans. 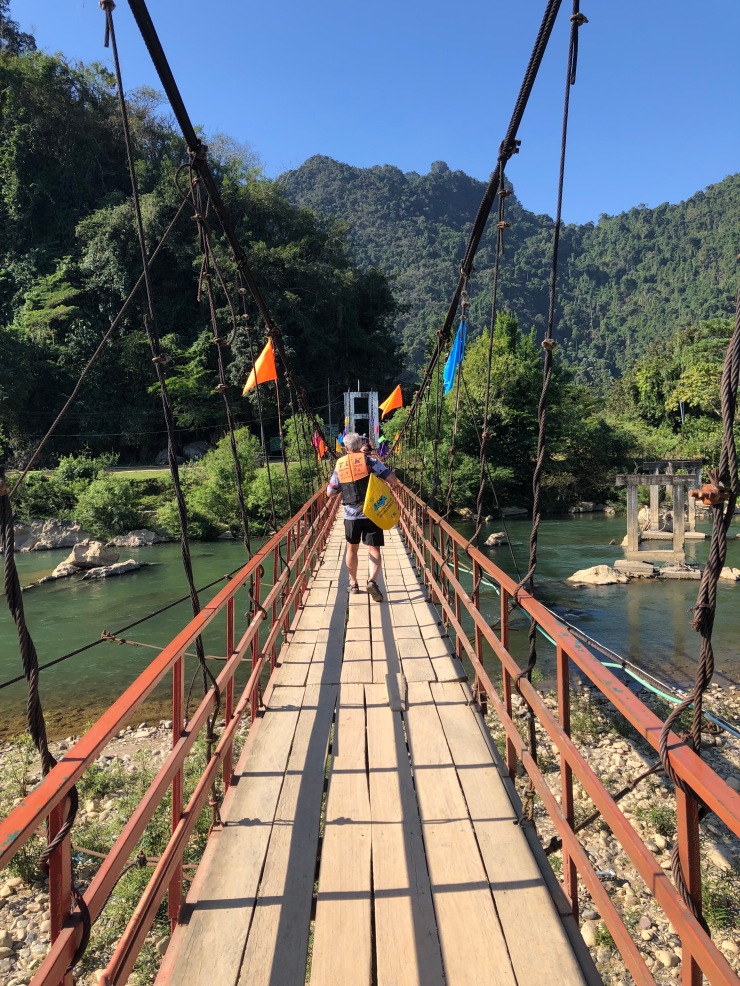 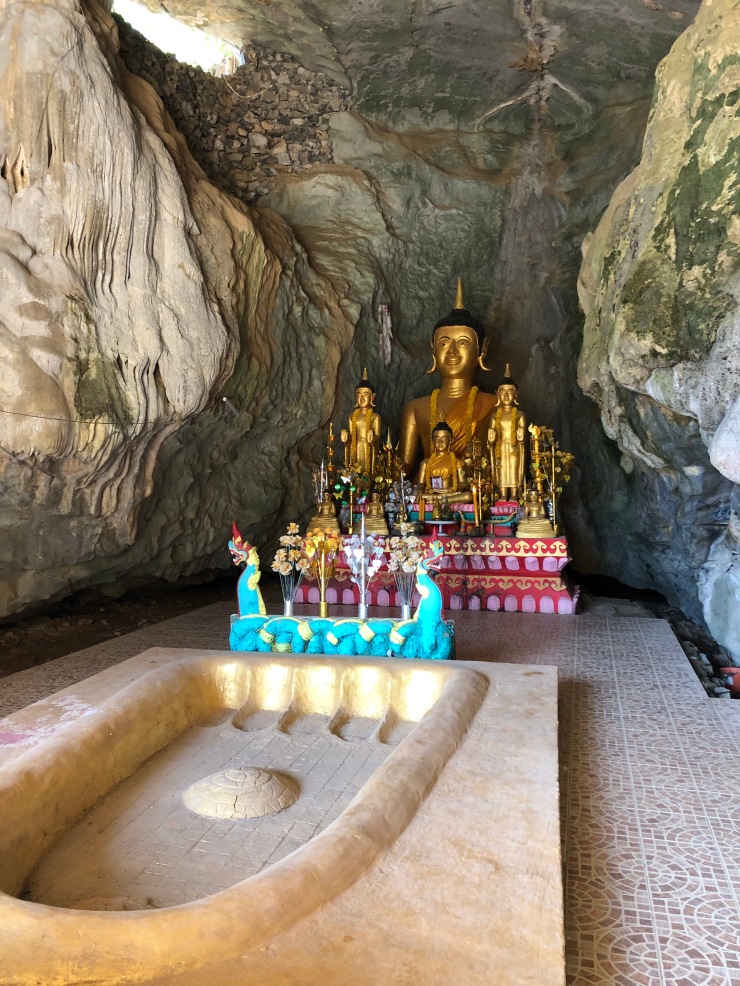 The tour, booked through TCK, ended up being a full day of activities and getting to see a few different areas around town. While it would have been nice to have the freedom of a motorbike to do what I wanted, it was nice to just jump in the back of a tuk-tuk and get taken to a cave, a zipline, and the Blue Lagoon. The roads in VV are also quite terrible so I was glad that someone else was driving! I was the only Western person on my tour which was a bit weird at first, but it turned out to be a really fun day despite not having many people to talk to! Surprisingly, I really enjoyed ziplining (I did it once in Mexico and found it a bit tedious) and the kayaking was fun as well.

Getting There: Unless you are driving yourself, you are probably arriving on a bus from Luang Prabang or Vientiane. There aren’t really any other options for getting to VV. And the roads are terrible and the bus ride will be less than pleasant, but that is part of the adventure! There are frequent buses so it is not hard to book your transport out of town once you are there. Getting around is best done on a motorbike, though you can also rent a bicycle. Otherwise, you can take a taxi or join a tour to visit the sights around VV.

Where to Stay: There are plenty of accommodations in town, at budget prices and slightly more expensive. Since I was looking for cheap places, I found a good private room at Army Barracks Hostel for about $10/night (incl breakfast). While it was not the fanciest place (the name alone should give you an idea of what it looked like), I slept better here than anywhere else on my trip. There are also plenty of party hostels if that’s your thing.

Closer to the river there are some nice hotels that also offer great sunset views. If you choose to stay on the other side of the river, you will avoid some of the noise from the town but you may want to have your own transportation. 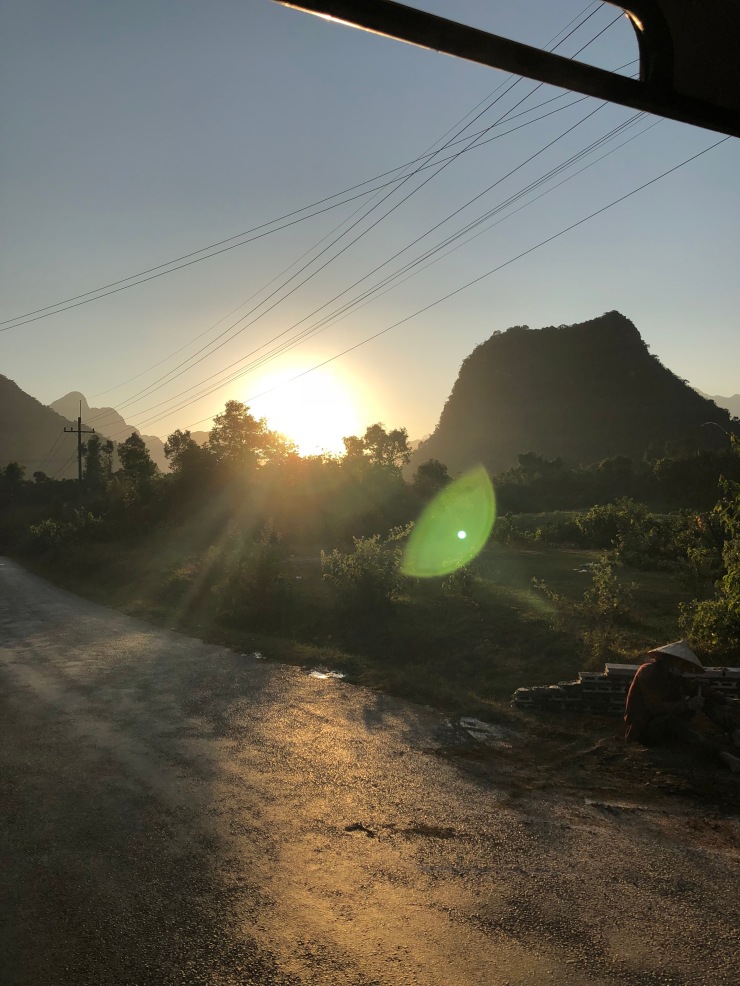 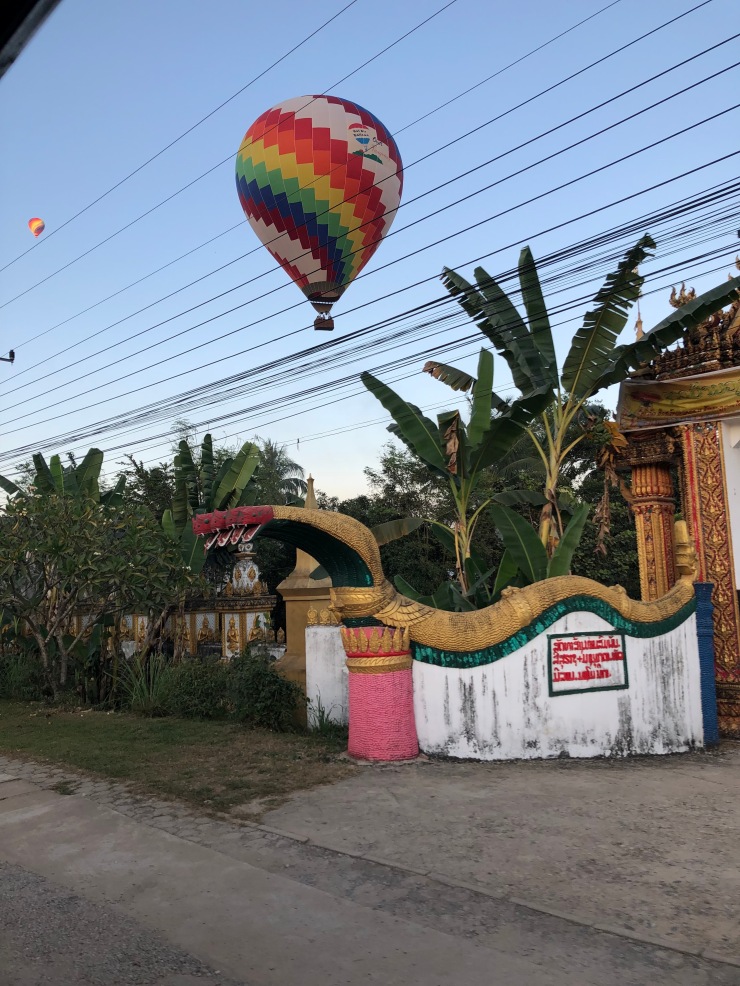 Things to Do: You have to get out of town to really see anything. The town itself is just hotels, restaurants, tour agencies, and spas – the beauty of VV lies outside of the town in its many natural settings.

Eating & Drinking: This is a touristy little town and the food options reflect that. There are a lot of places offering Western food and because of the number of Korean and Chinese tourists, there are many restaurants serving these cuisines as well. Of course, you can find local food here as well (ie the typical Lao dishes). I decided that VV would be my break from Lao food for a while and I tended towards other dishes while I was there (Indian, burger & fries). There are plenty of places for pizza, BBQ, and burgers – and even one Mexican restaurant. While I didn’t find any of the food that exceptional, it was all pretty decent if not just a bit overpriced. There is also a night market which offers some food including smoothies, fresh fruit, coconut pancakes, and even hotpot. 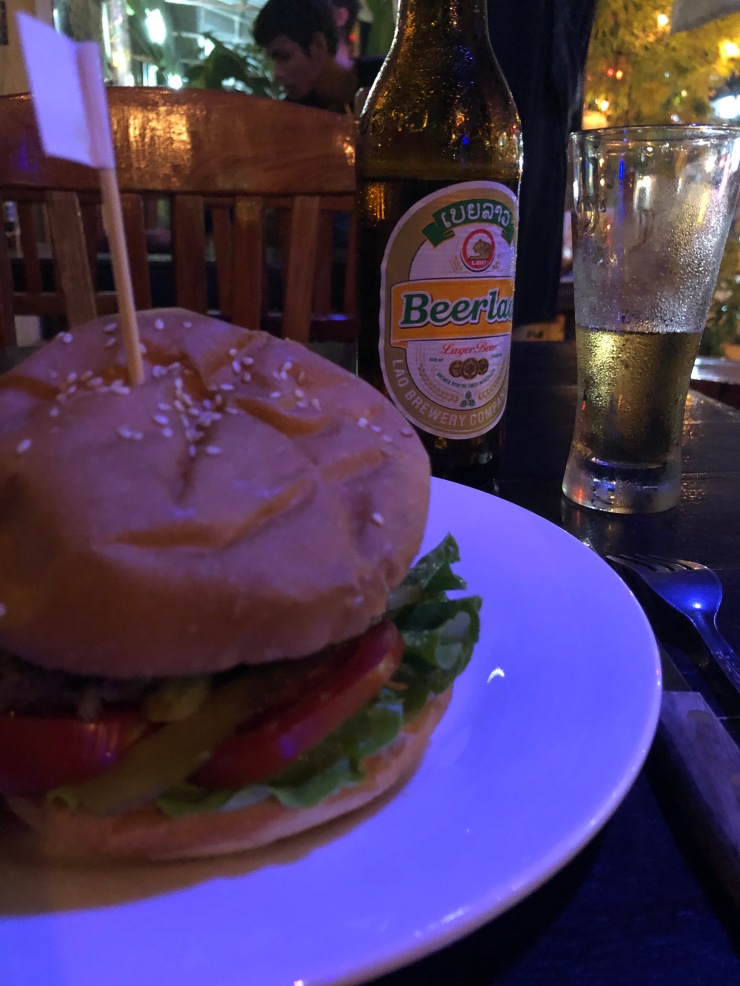